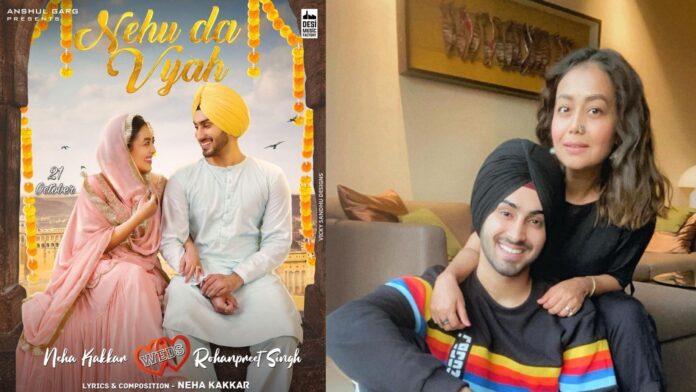 Bollywood’s voice Neha Kakkar shared her new song’s poster with his boyfriend and most probably would be husband Rohanpreet Singh. “Nehu Da Vyah” Is coming on October 21, which will be presented by Anshul Garg and the lyrics or composition will be one and only Neha’s. According to some latest Instagram posts and responses of Neha, it is cleared that they are going to tie knots and perform a grand marriage very soon.

October 10, she announced their relationship with a cute couple picture with Rohanpreet. Captioned it “You’re Mine @rohanpreetsingh #NehuPreet.” Rohanpreet had also shared the same picture, and had written, “Meet My Zindagi! #NehuPreet”.

Neha is a famous face and voice with the songs like Saki Saki, Dilbar, Manali Trance and many more. Whereas Rohanpreet was a part of reality show India’s Rising Star’s and Mujhse Shadi Karogi.

After that her desi look in pink she already made her publicity about   “Nehu Da Vyah” by that caption – “Aaja Chal Vyah Karwaiye Lock Down Wich Katt Hone Kharche. This is my favourite line from #DiamondDaChalla. song #NehuDaVyah.” Where Rohanpreet commented  “Chalo, chalo, karwaiye vyah.”

This rising couple is already being blessed by their fans and they are very clear about their relationship which is good news for Bollywood.