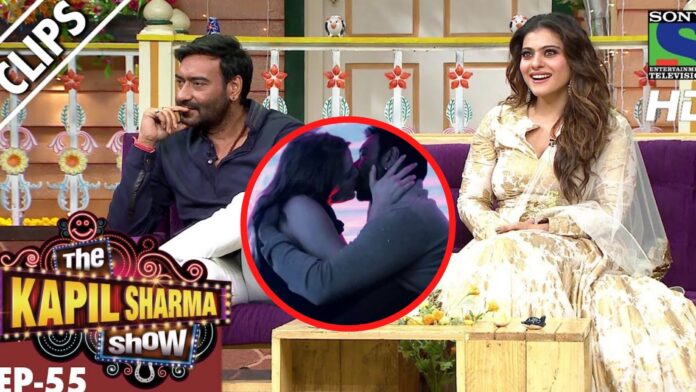 It is only a few from the Bollywood industry who did not involve in any kissing scene with the female co-star. The names had to be Bollywood actor Salman Khan and Ajay Devgn. However, Ajay Devgn is being considered as the exception after his movie Shivaay. The movie has been released in 2016.

On a recent episode in Kapil Sharma Show, Ajay Devgn and his wife Kajol came on the set. The power couple arrived in the promotion of their movie. There was this shocking reveal that Kajol made about the movie, Shivaay. The host of the show Kapil Sharma asked the actress about her take on the kissing scene from Shivaay. She disclosed that she was unaware that the movie has a kissing scene. She explained it saying, “He did not tell me at all. Before he took my permission, he apologized to me and said ‘I did it, I am saying sorry now.”On asking if she was jealous, she said, “I didn’t even know about it! But when I saw it …, ” expressing her disappointment and anger. She also added, “I took out the gun I had in Dilwale.”Kapil further joked about the same, asking another question, to Ajay Devgn, the director of the movie. He wanted to know how they ‘cut‘ the scene, “Did you do it or did Kajol ma’am called you up said ‘That’s enough! It’s done now.‘” Kapil asked.

The Movie In Concern

The movie Shivaay has been co-produced by actress Kajol and has been directed by Ajay Devgn. The movie starred Ajaya Devgn in the lead role. The movie also featured Abigail Eames, Sayyeshaa, and Erika Kaar. Ajay Devgn and Kajol appeared in the movie Tanhaji: The Unsung Warrior, released this year in the month of January. On their marriage, Kajol also opened up, saying, “Nobody wanted us to get married besides his family and my family. My family also was iffy. My dad didn’t talk to me for a week when I told him I wanted to get married. It was because I wanted to get married. He was just like why do you want to get married, you’re so young and your career is doing so well and I was like but I want to get married. Ajay and I were very different people, so lots of people had reservations as to what we would be like as a couple and we were not very social even then. Not a lot of people had met us together or knew what we were like together.” when she appeared in No Filter Neha.

The Kapil Sharma Show: The stars of the show were seen together on the occasion...