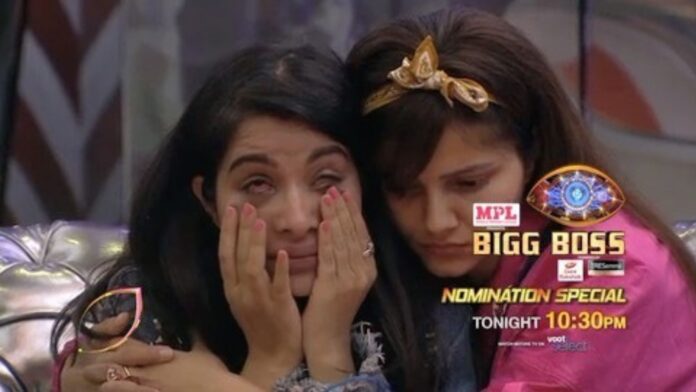 The Sunday episode was much more interesting than the previous week. There were fun games of balloons, Seniors were tagging freshers and Meher (Nimrit Kaur Ahluwalia) and Sarab (Avinesh Rekhi) of the television show, Choti Sardarni, enter the house with fun games too.

Three cricketers from Mumbai Indians also entertain the contestants and they asked a lot questions which the freshers were unable to answer.

The Seniors again became angry with Rubina Dailik for her overthinking and accusing attitude. There was aslo a mess between Nishant Singh Malkhani and Rahul Vaidya, where Rahul addressed Nishant as the  ‘the most fake person ever’.

Salman khan, out of anger told 10 contestants to pack their bags for home. He warned each and everyone for being active. Today will be a new eviction episode where Nikki Tamboli will be seen nominating Shehzad Deol, Pavitra Punia will nominate Nishant Malkhani and Eijaz khan will nominate Rahul Vaidya.

This is the shortlist revealed, But actually, it will be the senior’s decision that who will leave Bigg Boss 14. There will a huge shock for contestants and audiences too. Fun, entertainment will not be sacrificed at all.