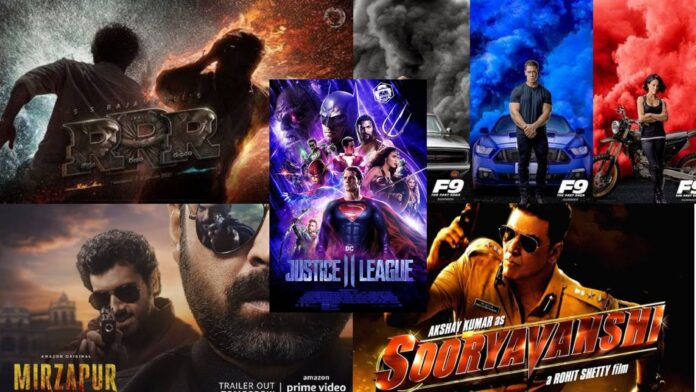 Here are the top 5 most awaited upcoming Films and web series worldwide wide which are delayed due to the lockdown but now going to release very soon.

After the success of This thriller/crime web series 1st season, the audience had put up the most asking question that

After the wait of 689 days from season 1, Mirzapur season 2’s trailer is going to launch tomorrow at 1 pm and season 2 will be premiered by 23rd October.

Due to the lockdown and govt.guidelines, the makers of Sooryavanshi already postponed it’s releasing date 2 times and the audience still wants to know that when they would be able to watch their favorite star on the big screen, however, sooryanshi has become one of the most awaited Indian films as fans shared their desperation for this movie on their social media handles, but still, they have to wait for next official announcement by makers.

RRR is also one of the most awaited upcoming films and web series. A big banner’s production multilingual and multi starer this film become one of the demanding films in South India.

S.s rajamauli is one of the big producers of Indian cinema and when he announced his upcoming movie with south superstar Raj Charan, N.T Rama Rao, Alia Bhatt, and of course Ajay Devgan, everyone was waiting for this multi-star action thriller, but as every producer has suffered from the pandemic reactions as well Sir Rajamuali also diagnosed positive with COVID but the good news is that RRR shooting has continued today in Hyderabad and very soon we’ll get an official announcement about this one of the most awaiting feature film.

Due to the worldwide COVID outbreak, Hollywood is also suffered from a lot of difficulties to continue their shooting schedules as well Universal pictures has postponed their release date for fast 9 starring Vin Diesel, John dena, and the other cast, the shoot has almost completed but the makers are not ready to release it in 2020 so fast series lovers have to wait till their next announcement.

Justice league2 is a sequel to Dawn of justice superhero film series with their all superheroes Batman/Superman/Wonder woman/Aqua man/Flash which is produced by DC pictures partnered with warner bros, this one of the most awaited filmmakers has postponed their schedule to bring it on the floor in 2020, now the makers are going to release it in 2021 as this series has a worldwide fan following and this sequel is having entries of rest of the DC superheroes like Green lantern!

So these were the 5 most awaiting upcoming films and web series of the year which are delayed causes of COVID outbreak.