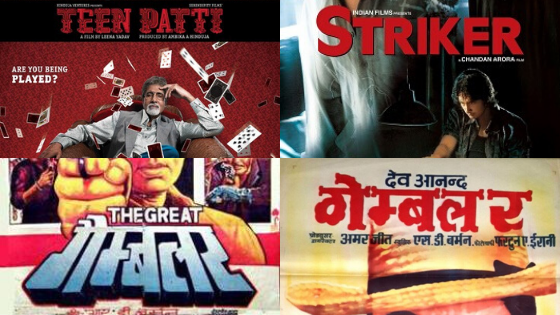 With most of us under self-isolation because of the COVID-19 outbreak, we need good Bollywood movies to watch that will help us pass the time. Bollywood movies have always had an element of excitement and risk. It also has a flamboyant nature to it. Indian audiences have always been ‘extra’ in that way. List of movies to watch will be incomplete unless we include a few casino movies from Bollywood, which have captivated Indian audiences.

Teen Patti released in 2010, is a thriller directed by Leena Yadav. The movie has stars such as Amitabh Bachchan, Ben Kingsley, and Shraddha Kapoor. The movie revolves around the character Venkat Subramaniam, played by Bachchan. Venkat is a mathematics professor who is teaching maths to children in his village. Venkat tells Perci (Ben Kingsley) about an equation that he devised that would change mathematics in the long run.

He decides to test this theory he has on his students. He invites a few of them to play teen Patti. When his theory proves right, he decides to expand onto people who are high stake gamblers. With the stakes raised by so much, how will Venkat change? Will he start to get influenced by the large amounts of money he starts earning? Teen Patti is available on Netflix on not only considered by us to be the best Bollywood casino movie out there.

The Great Gambler is a 1970s film that stars actors like Amitabh Bachchan, Zeenat Aman, Neetu Singh, and Prem Chopra. The movie is directed by Shakti Samanta. It has turned into a cult classic. Jai, played by Bachchan, is an avid gambler who has never lost a game.

A casino owner by the name of Ratan Das, played by Madan Puri, wants to hire him to play for high stakes. As he keeps on playing, the stakes keep getting higher. Jai also ends up trading military secrets. The plot of the movie is complex and interesting. It is a tense thriller that keeps you on the edge of your seat.

Striker released in 2010. Its produced, written, and directed by Chandan Arora. It stars Siddharth Narayan, Usha Jadhav, and Padmapriya in the leading roles. The movie revolves around Surya, who comes from a poor background. He is very good at the game of carrom. He wins a lot of games and at the age of 12 wins the championship. But this isn’t enough for him.

As he becomes older, his passion for the game leads him into dangerous territories. He ends up losing all his money. This leads him into the underground scene for carrom.

Gambler released in the 1970s. It is a thriller directed by Amarjeet, starring Dev Anand, Zaheeda, and Shatrughan Sinha in leading roles. The movie revolves around gambler Raja played by Dev Anand. Raja, abandoned by his mother at a very early age, was raised by Master, who was a don.

Master expected Raja to work for him when the time came. The movie revolves around Raja’s struggle to get out of the criminal life that he had. He faces different obstacles on the way.

These are some of the top movies to watch during this difficult time around the globe. You can watch these Bollywood movies at any time and enjoy a great time.