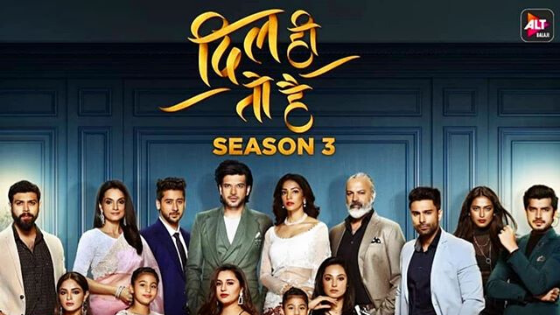 The producer Ekta Kapoor has mastered the art of sizzling topics that blockbusters the TRP chart of the Television Channel. The upcoming show Dil Hi Toh Hai Season 3 is a consequent season of the romantic saga of Ritwik and Palak.

The first season was a story of how they met and fell in love. The girl was from a middle-class family and the boy was super-rich. As we see in most of the Indian cinematic plots, family denies their marriage. The struggle of these two, for togetherness, was a hard-hitting story for the audience.

They praise the show in a way that even today the producer herself confirms that it was a huge success for her team. The ups and downs of the first season left the couple split because of family drama.

In the second season of Dill Hi Toh Hai, we have seen Palak as a mother of two girls, this time family was on another side and things were settling anyhow. But, the show ended with an accident where the situation was kept suspense. Whether they are alive or death it was a mystery.

The upcoming season, Dill Hi Toh Hai Season 3 is going on air from 27 January 2020. But, this time we will be able to see the show on ALT Balaji only.

The show is a superhit just before its trailer launch. Its charismatic charm of the previous two seasons has made a solid platform for it.

The shooting of  Dill Hi Toh Hai Season 3 was started in September 2019. Are you all excited to see Karan and Yogita once again, this time on ALT Balaji? Let us know in the comment section.