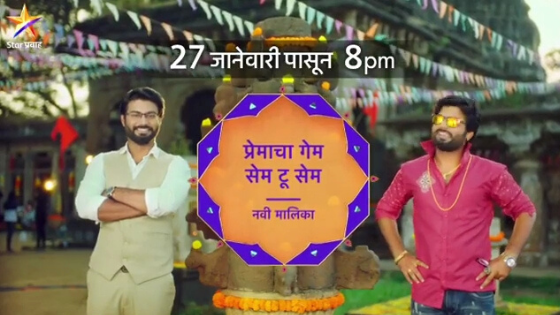 A totally new concept of storyline is coming to entertain us on Star Pravah. The name of the show is Premacha game Same To Same. It is based on the love story of twin brothers. Check out the latest updates like the Start date and the cast of the show here.

The channel Star Pravah is popular for its unique shows and serials. Star Pravah, Marathi Parampara, Marathi Pravah is a Marathi Entertainment Channel. After the serial Aai Kuthe Kay Karte, based on the life of a housewife, it is back with a brand new family drama  Premacha Game Same To Same.

The serial will start from 27th January 2020 on Star Pravah. It will be seen from Monday to Saturday from 8:00 PM. It could be seen on Hotstar official anytime you want.

The story of  Premacha Game Same To Same is based on the life of two brothers who are in love with the same girl. One of them is a doctor while another boy is like a goon. It is going to be interesting to see them convincing the same girl in the show.

The popular actor of the Marathi industry, Sanchit Choudhary is in the lead role of the male character. His acting in the promo is very funny. The show will be highly entertaining for sure. Sanchit will play the role of twin brothers.

Prajackta Navnale will be seen as a female lead role. It is a comedy romantic saga. The on-screen chemistry of Prajackta and Sanchit will be eye-catching. We will see the twins playing games to make her fall in love.

Premacha Game Same To Same will be a story of brothers in love that may produce a feeling of anger, love, compassion, and heartrate in their brotherhood.