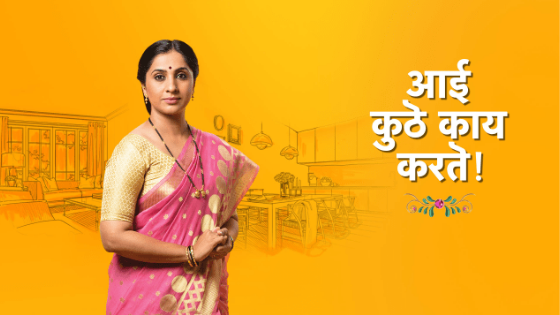 Aai Kuthe Ky Karte serial is a new Marathi serial going to be launched on Star Pravah. It is a story of a housewife managing her family but failed to manage her self-esteem in society. Her own family members have started underestimating her skills just because she has focused on the house instead of the carrier.

This is a story of a homemaker who is being taken for granted for her contribution to family and house. She herself is neglecting her self worth and faces people doing the same with her. It moves her from within but she manages to smile in this situation also. The promo of Aai Kuthe Ky Karte is very much heart touching. As the name suggests Aai Kuthe Ky Karte meaning what mother is doing. It clearly depicts the unimportance of her job.

Aai Kuthe Ky Karte serial will start on 23 December 2019. The timing would be Monday to Saturday at 7:30 pm on Star Pravah.

This serial is produced by Rajan Shahi. The promo has raised the excitement in the audience about the upcoming serial Aai Kuthe Ky Karte.

This is a female-centric serial, showing the feelings of a lady who has lived her whole life for the future of her family, is being neglected just for the thing she is doing for years. She has never given importance to her existence and the family members also get habituated the same way.

It is going to be a story of a mother who will make the house feel her value by every means. The makers have found a very relevant topic of society and the time of telecasting is also very strategic. It has a higher chance of grabbing the attention of viewers. It is said that this serial is going to be the highest TRP gainer in a few weeks.

Let’s see how does it perform on the silver screen and how Aai Kuthe Ky Karte manages the audience’s attention. Comment your views below.