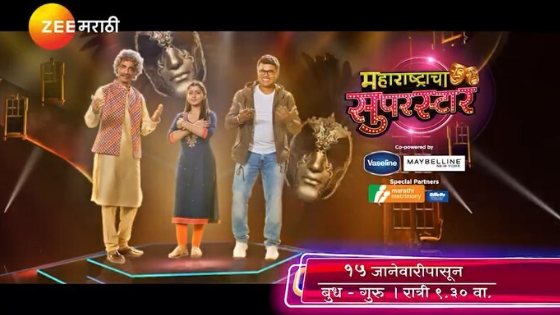 Zee Marathi is coming with the next season of a talent-based reality show named, Maharashtracha Superstar after 9 years. This time with so much fun and a totally new concept.

Maharashtracha Superstar is a platform where the contestants will show their talents in the fields of dancing, acting, and singing. The comeback, after a long time, is expected to be filled with power pack performances.

The show has opened up a path for many ambitious talented people to the industry since then. It includes Dhanashri Kadgaonkar from Tuzhat Jeev Rangala and Nilesh Sable, host of Chala  Hawa Yeu Dya.

One more personality of the Marathi television industry is Abhijeet Khandkekar. We all know him as Gurunath of Mazhya Navryachi Bayko. He has performed in this show long back, and now he is going to host the same show very soon.

The show is a very bright opportunity for all those who dreamt to make their position in Marathi Entertainment Industry. As Abhijeet, if you want to apply your talent in the industry, stay tuned for the updates of the show.

The show is going to hit the heights of TRP because of its interesting format and the cast. Sanjay Jadhav is one of the reputed names going to be seen in the judges panel. Sanjay is a film director, who has directed movies like Timepass and Duniyadari. Markand Deshpande is also going to join him in Zee Marathi Maharashtracha Superstar.

As we mentioned earlier, Abhijeet Khandkekar is going to host the famous show Maharashtracha Superstar. The talented actor has started his carrier from the same show long back and played crucial roles in many films and shows.

Maharashtracha Superstar auditions were held at different places and now it is all set to rock the silver screen. It is going to feature many popular celebrities of the industry as a part if the format of the show. Contestants are selected on the basis of auditions from different parts of Maharastra. Stay tuned to know more about them!!

The show will be on air from 15 January 2020 on every Wednesday and Thursday at 9:30 PM.  It is said that the platform will provide a huge opportunity to the entertainment carrier enthusiast aspirants.

Make sure you visit this space for the latest updates about  Zee Marathi Maharashtracha Superstar.