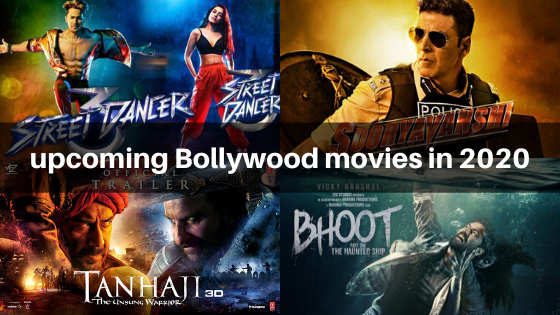 All of us are early waiting for 2020. It has been the last month of the year and we are all set to enter the new year with lots of excitement. Isn’t it? But, have you planned your fun calendar and dosages of entertainment? Obviously not. Now, you will ask what it is? The movies that you are going to enjoy throughout the next year are here. So, let’s have a movie goal for the next year together and have a fantastic roller coaster ride of movies that you are going to enjoy next, I mean upcoming Bollywood movies in 2020. Some of them are already claimed as the blockbuster of 2020.

A story, based on real-life incidents, that has turned Malti’s(Dipika Padukone) life upside down. It has showcased the inclination of society towards external beauty. Chhapaak is based on the life of Laxmi Agarwal, an acid attack survivor. The film is revolving around the life of Malti, who has been attacked in 2005 at New Delhi. The trailer is out and has caught an amazing response. It is one of the would-be successful upcoming Bollywood movies in 2020 according to critics.

Tanhaji: The Unsung Warrior, an Indian Historical biography film. It is based on the life of Tanhaji Malusare, founder of the Maratha Empire. It is an action film from Ajay Devgan Production house. Tanhaji is a story of a historical fight for Kondhana Fort between Mughal and Maratha. Tanhaji(Ajay Devgn), as a military leader of Shivaji Maharaj, was sent for this fight from Maratha side. And Uday Bhan (Saif Ali Khan) from Mughals. This battle was a historical turning point for South India.

Gulabo Sitabo, characters of a Puppet show is now the title of the upcoming Bollywood movie in 2020. It is a story of mixed felling relations between a house owner and a tenant. It is an Indian comedy-drama, produced by Ronnie Lahiri and Sheel Kumar, written by Piku fame Juhi Chaturvedi. It is a story well-picturized in Lucknow and all set to become a superhit box office upcoming Bollywood movie in 2020. Its shoot is wrapped up and the first look of characters was published on Instagram. It makes the suspense of the story more eye-catching. Amitabh Bachhan and Ayushmann Khurana as a lead role, this is going to be a Family-comedy movie of 2020.

Pretended as 3 part of ABCD, Street Dancer is going to be happening upcoming Bollywood movie in 2020. Produced by Bhushan Kumar, Krishan Kumar, and Lizelle D’Souza it is a dance film just like rest two parts of ABCD. The first look of a movie poster is released recently, it shows Varun Dhawan in a stylish look.

A debut film of Alaia Furniturewala, Jawaani Jaaneman is going to be a family romantic comedy-drama of upcoming Bollywood movie in 2020. It presents Saif Ali Khan as 40 Years old father of Alaia F. after the shoot wrapped up, the first look of movie characters was disclosed. It is said that after 20 years Tabu and Saif Ali Khan are sharing screens through this movie.

Gujan Saxena: The Kargil Girl is a Dharma Production movie. This upcoming Bollywood movie in 2020 is on the life of the first woman airforce pilot in combat with Srividya Rajan. In this film, Janhvi Kapoor is in the lead role. Poster of Gunjan Saxena is released, in which Janhvi is shown as trying to fly a paper plane.

Imtiaz Ali film, Love Ajkal 2 is one of the Romantic Drama upcoming Bollywood movies in 2020. Imtiaz Ali is a master of romantic movies since Jab We Met. as the movie shoot is completed, lead roles Kartik and Sara both have posted pictures on social media regarding this movie shoot.

It is one of the horror upcoming Bollywood movies in 2020. Starring Vicky Kaushal in the lead role, it is the first part of 2 of them. Poster of BHOOT is very scary and a promising treat for horror lovers.

It is a power pack action thriller from upcoming Bollywood movies in 2020. A Sajid Nadiyad Wala production, Baaghi 3 is repeating Tiger Shroff this time also. The popularity of baaghi1 and Baaghi 2 has made the audience expecting high voltage action drama from 3rd part also. The outdoor shooting of the movie is planned in Morocco, Egypt, Serbia, and Turkey.

It is a romantic Comedy Drama Film, one of the homosexuality related upcoming Bollywood movies in 2020. A spin-off of Shubh Mangal Savdhan, Shubh Mangal Zyada Savdhan is going to be a light movie discussing homosexuality. This is a story of Tripathi Family and an outsider Kartik. It seems like Neena Gupta and Gajraj Rao are the favorite parent for Ayushman’s character since “Badhai Ho”. as Subh Mangal Savdhan, this on is also of the comedy movie plotted on a serious topic. The teaser is making it so interesting by animated characters.

The much-awaited movie of Bollywood industry, Sooryavanshi has set hopes by its trailer. The lead role is played by Akshay Kumar (Veer Sooryvanshi), and It is said that the movie name is altered as  “Veer Sooryavanshi”. Starring Akshay Kumar, Ajay Devgn, and Ranveer Singh, it is a blockbuster for sure. A power-packed multi starer upcoming Bollywood movie in 2020, Sooryavanshi is produced by Rohit Shetty and Karan Johar in association with Reliance Entertainment and Cape of Good Films.

A sports Drama movie 83 is a true representation of Indian cricket winning history of 1983 world cup. It was a match that showcased Indian cricket talent on the globe by winning the ICC Cricket world cup for the very first time. 1983 world cup journey and the lead role Kapil Dev is fantabulously represented in 83 by Ranveer Singh. The teaser of 83 makes it one of the outstanding upcoming Bollywood movies in 2020. 1983 world cup has a strong bond with Indian cricket lovers, which will easily make is a box office hit for sure. It is known as a Biopic of Kapil Dev.

A biopic of Jayalalitha, Thalaivi is going to be released in three languages. It is based on the life of a late politician and film actress. The first look of the poster is very impressive. “Queen” Kangana Ranaut is playing a lead role in “Thalaivi”. It might be the only biopic movie of a politician from upcoming Bollywood movies in 2020. The trailer of the movie is showing various life events of the legendary character.

It is a movie that has created a lot of buzz in media starting from announcing to release date. It is an upcoming Bollywood movie in 2020 that features Alia Bhatt and Ranbir Kapoor. It is the first part of a historical trilogy. It is a romantic contemporary story with ancient elements. The director of Brahmastra has spent a lot of time to research on topics that can make it a more confident representation. All these buzz and story assumptions of Brahmastra makes it much wanted a movie of the year in the audience.

A film of Real Life Productions Pvt. Ltd. Radhe is one of the upcoming Bollywood movies in 2020 that is very close to Salman Khan fans. The shooting of the movie is just started and social media is full of Salman’s next move after Dabang 3. The star cast of the movie was also not very much finalized from then Salman Fans have welcomed it wholeheartedly. “Radhe” name is very much connected with Salman since “Tere Naam”.  Though Radhe: Your Most Wanted Bhai has a story in the pipeline, it is going to be a big hit of 2020, for sure.

Release Date: 2020(dates not announced yet)

“Karam Se Dacait, Dharam Se Azaad” an Indian action-adventure movie Shamshera is based on the life of the dacoit tribe around 100 years back. It shows the fight between British rule and decoits. The teaser of Shamshera leads to a very unique story as an upcoming Bollywood movie in 2020. It is a high budget movie that predicts a larger than life story with the highest engagement of the audience in 2020.

Krrish 4, a movie directed by Rakesh Roshan is the fourth part for Krrish Series. After “War“, Hrithik is coming up with this movie. The trailer is not looking as promising. Let’s see how does it perform on screen. Due to Rakesh Roshan’s health issues, it is delayed.

A remake of Tamil film “Veeram”, is going to be a story of a common man who is standing with his fiancee’s family in the worst situations they are going through. It is a comedy film, whose poster shows Akshay Kumar in Black lungi with all the accessories.

So, here we have presented a full dish of entertainment for you, which is filled with, comedy, action, drama, horror, romance and much more awaited movies. We are going to hit you with all the spicy updates every now and then, throughout the year. So, stay tuned!!