Home Bollywood Chapaak trailer: A Journey of an ordinary girl to become beautiful inside... 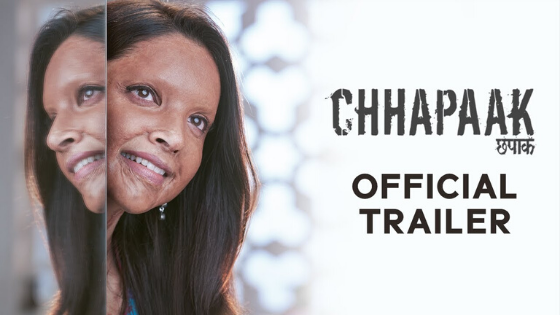 Meghna Gulzar, a director famous for Razi and Talvar is once again back with “Chapaak”. A woman-centric story that is evolving around acid attack survivors.

Much awaited trailer of Chappak is released recently, which is based on a true-life story of acid attack survivor girl, Malti. The way she faced the circumstances and stood still with “Unhone Meri Surat Badli Hai, Mera Man Nahi” is an announcement of a very heart touching story inside.

The trailer of Chapaak has gained millions of views in very little time. Just 2 minutes and 20 seconds of the trailer is a perfect expression of what happens with acid attack survivors in daily life.

Lots of celebrities have reacted to the Chapaak trailer.

It is a story of a middle-class girl, who has big dreams. The Chapaak trailer has a glimpse of how the incident happens in the day time in front of people and what was the reaction of society for this. It is a mirror image of how the skin color-conscious society reacts to the victim of an incident for which she is not responsible.

Supporting actors are having a strong impression on the story revolving around the main character, Malti. The lead role is well played by famous actress Dipika Padukone.

Chapaak is based on real-life incidents that strongly show the effect of how does it turn a normal life to such an extent that after treatment when Malti looks at a mirror for the very first time, she herself screams. Her routine life and her carrier are badly affected by her look and the incident happened with her. But, Vikrant’s messy and supporting actors have filled her journey with enthusiasm and joy.

Chapaak is a production of Fox star studios, Deepika Padukone, Govind Singh Sandhu, and Meghna Gulzar. It is written by Meghna Gulzar and Atika Chohan.

The release date of Chappak is confirmed as of January 2020.

Let’s see how can a story of an acid attack survivor makes it large on a cinema screen. This is a topic that people are least interested to discuss. We invite you on this website to comment below and show your reactions to those who want justice.