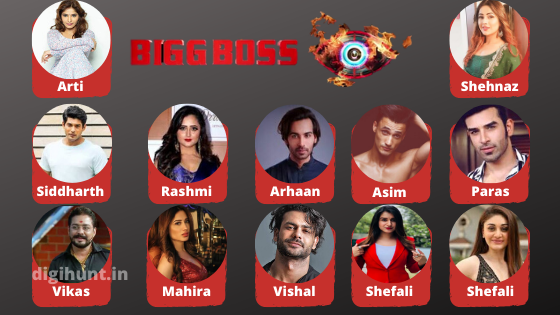 Bigg Boss: The TV Reality Show that is Spicing Everyday

Bigg Boss, always sizzling show airing on Colors TV and Voot is the hot favorite since its first season. Having Salman Khan as host, it is the most TRP occupying show on Colors TV.

Bigg boss is in 90’s kid must be seen list of TV shows. Now you will be wondering why are we talking about Bigg boss 13 today? But, let me tell you it is the first season with 12 wildcard entries till now.  Recently it has been extended for 5 weeks because of the popularity it is enjoying.

Vote for Your Favorite… Let’s See who will Win?

The theme of Bigg Boss 13 House

This season is totally stuffed with the celebrities that make it most watching. The Bigg boss house is a center of attraction for its design and glamor. This season’s theme is “Bigg boss museum”.

The show is on air from 29 September 2019 with Salman Khan as host. This “Tedha” season is full of twists and turns with unpredictable situations. It adds thrill and fun factor into the show by making it hot famous.

It is a full packet of entertainment with celebrity tadka. Weekend ka Vaar is viral and must-watch part of the Bigg boss 13 with Salman Khan.

Sultani Akhada is a “dum ka hisab” performance that reveals the winners and most favorite contestants of the Bigg boss.

Let’s have a look of the Bigg Boss house:

While Arhaan and Rashmi’s love affair is going viral, Himanshi’s accused of body shaming on Shehnaz is the talk of the show. While daily news updates of eviction and wild card entries, this show is getting popular day by day. This is the reason why it is extended to 5 weeks.

It is believed that this season has gained the highest interaction with the crowd and became popular amongst the youth.

As very strong competition is going to take place, it will be difficult to assume the winner this time.

Siddharth Shukla, Asim Riaz, Shefali Zariwala and Rashmi Desai are some of the most favorite contestants of this season.

Let’s check it out that who has the strongest possibilities to win the race by polling.  Watch Bigg Boss 13 on Colors Mon-Fri at 10:30 pm Sat-Sun at 9:00 pm and Anytime on Voot app for pc, android or IOS.

From Kareena Kapoor-Saif Ali Khan to Richa Chaddha-Ali Fazal, these celebs started living together before...

Tejasswi Prakash And Shamita Shetty Get Into A Big Cat Fight

Sahil Khan had an affair with Tiger Shroff’s mother? What happened with Salman Khan?...