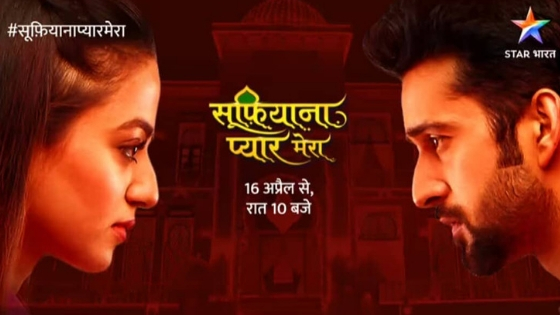 Star Bharat is all set to won the hearts of the audience with the upcoming love story that is titled as Sufiyana Pyar Mera. Sufiyana Pyar Mera serial will be broadcasted on Star Bharat only. Earlier the news stated that the serial will be broadcasted on Star Plus but due to some technical Glitch the makers have decided to launch this serial on Star Bharat. Check out all the details regarding Sofia Na Pyar Mera serial cast, story, start date, timing, and others.

The story of this upcoming serial Sufiyana Pyar Mera will revolve around the Romance between Helly Shah and Rajveer Singh. Both of them will belong to Muslim families.  In this upcoming serial the viewers will experience the anger, Love, fight for love, strategies and several other scenes.  As per the sources, despite the fact of belonging to a Muslim family the lead actress will deny getting married on her marriage day. She will not say Qubool Hai to The groom.  And then Rajveer Singh will give his all efforts to get the love of his life. Now it will be interesting to see where the life of both characters will take them.

As per the details available, the Sofia Na Pyar Mera star Bharat serial Will Go On Air on 16th April 2019

The Sufiyana Pyar Mera serial will be broadcasted from every Monday to Friday at 10:00 p.m. only on Star Bharat channel. Viewers can also watch this serial on the online streaming website that is hotstar.com. Furthermore, users can also download the Hotstar application in their smartphones by visiting the Google Play Store.

The promo of Sufiyana Pyar Mera serial has already been launched online. Viewers can watch the serial by visiting the below-given link:

These were the details about the Sufiyana Pyar Mera serial of Star Bharat. So, what are your expectations with this upcoming love story that is going to be held on Star Bharat channel? Share your views with us by using the below-given comment box. For more related updates you are suggested to visit our web portal regularly.