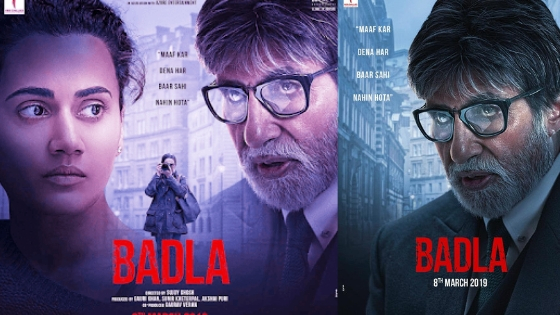 Amitabh Bachchan and Taapsee Pannu are again coming to blow the minds of the audience away with their amazing acting/performance in their upcoming movie that is titled as “Badla”. Badla is a suspense thriller movie. As per the details available, this movie is going to be released on 08th March 2019. Check out the details about Badla movie release date, cast, story, and trailer from this article of Digihunt.in.

The storyline of the Badla movie is based on the life of a lawyer investing in a case that is full of suspense because of the death of a young man. In this movie, the viewers will experience the situation of a young lady whose lover is dead. And the interesting thing is that she found his body next to her when she wakes up in the morning. She was in a hotel and locked in a room. The whole situation happened to make her guilty for the death of her lover. In order to remove the guilt and get free from the murder case, the woman hires a lawyer with perfection.

As per the details gathered by our team, following are the actors included in the Badla Movie Star Cast. You are suggested to take a look…

The music of the Badla Movie is composed by Anupam Roy, Clinton Serejo and Amaal malik.

According to the sources, the Badla Movie is going to hit the Silver Screens on 08th March 2019. In order to surprise the fans, Shah Rukh Khan and Amitabh Bachchan have prepared a special Video.

The trailer of Badla is already out. You can check the video from the below-stated link.

While within the one hour of releasing, Badla Movie trailer hit 250k views and later it reached 10 million views within 1 day.

So are you excited to watch this upcoming movie?? Share your views with us by stating your comments in the below given comment box. To avail further details about the same, you are suggested to visit our portal regularly.