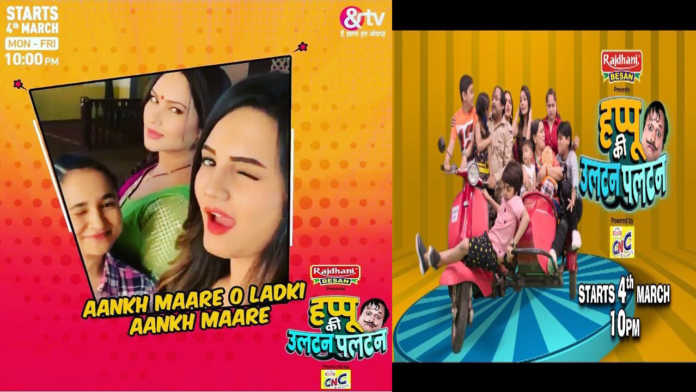 Happu Singh is coming to entertain all with his awesome acting and comedy skills. Yes, AND TV (&TV) is coming with a unique comedy based show “Happu ki ultan paltan” having Yogesh Tripathi as Happu Singh. (Happu Singh was a famous character in the show Bhabhi Ji Ghar Par Hain). Production of this serial is done under the banner of Edit II Productions.

As per the details available, the And tv new comedy serial will go on air from 4th March 2019, Every Mon-Fri at 10 PM.

As per the details available, the story of this upcoming comedy show will be based on Happu Singh’s Life.  Yogesh will be seen as playing the role of corrupt police constable Happu Singh. Viewers will also experience the comedy of popular actress Kamya Pathak. She will play the role of nine notorious children. The show is considered as the spin-off of Bhabi Ji Ghar Par Hai.

Following are the actors included in the Happu ki ultan paltan Cast:

As per the details collected by the team of Digihunt.in, the Happu ki ultan paltan will go on air from 04th March 2019 at 10 PM from Monday to Friday.

The promo of this upcoming serial of And TV is also released. You can watch the video in the below section:

Are you excited to watch the tremendous comedy of Happu Singh? Share your views and expectations with us. To get more details about and TV new comedy serial cast, promo you are suggested to keep visiting our web portal.

Afsana Khan Hits Out At Shamita Shetty As She Faints After Fight With Devoleena Bhattacharjee, Says “Isko Bolte Hai Karma”

Sidharth Shukla is the Most Searched Indian Celebrity of the Year according to Yahoo 2021 Year in Review!

The Stylish Superstar Mahesh Babu Looks Adhirindi! His Photo shoot has gone viral with his...

You will not be able to remove the eyes from the new pictures of Urfi...