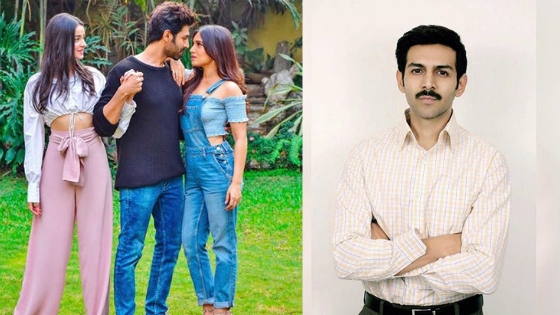 Still, there are several people who love old movies including action, romance, and thriller ones. Sanjeev Kumar, Vidya Sinha, Ranjeeta Kaur movie Pati Patni Aur Wo was released in 1978 and now the producers are all set to bring those moments again. Pati Patni Aur Woh 2019 Remake is all set to hit the silver screens.

Pati Patni Aur Woh is an Upcoming Bollywood Movie in 2019. This upcoming comedy romance film features Kartik Aaryan, Ananya Pandey, Bhumi Pednekar in lead roles. Bhushan Kumar, Juno Chopra is the producers of this upcoming comedy movie and Mudassar Aziz is the Director.  Pati Patni Aur Woh 2019 Remake is being produced under the banner of T-Series, BR Studios and its release date is also not revealed yet.

This Movie is the remake of Sanjeev Kumar, Vidya Sinha, Ranjeeta Kaur movie Pati Patni Aur Wo in 1978. This movie is based on a married man having an Extra-Marital Affair.  In this movie, Kartik Aryan is playing the role of a common humble man and Bhumi is going to play the character of his wife. While on the other hand, Ananya Pandey will feature the role of other women with whom Kartik is having an Extra-Marital Affair.  In this movie, the audience will experience the story of a man torn between his wife and an attractive woman who is not his wife.

Pati Patni Aur Woh 2019 Remake is the collaboration of Ananya Panday, Kartik Aaryan and Bhumi Pednekar. This is the first time these three actors are coming together in a film.

On Tuesday, Kartik Aryan shared the first look from the movie. In this First Look, he is seen as dressed in a nondescript shirt and with a mustache on his face. Kartik Aryan First look is just like as a typical middle-class man from the Indian heartland.

Well, it will be interesting to see this trio on the silver screen for the first time. So what are your expectations with the movie? Please let us know in below comment box. For more details about Pati Patni Aur Woh 2019 Remake Cast, Release Date, keep visiting or web portal.