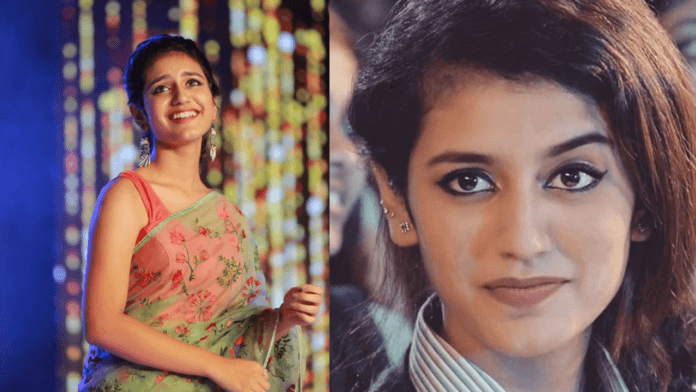 Right Now, Everyone is talking about the upcoming Bollywood Debut of the Wink Girl. Yes, we are talking about Priya Prakash. She is all set to make her place in Bollywood with her debut titled as Sridevi Bungalow.

But as soon as the Sridevi Bungalow Teaser Release, Twitter started slamming Priya for her role.  Twitter Slams Priya Prakash by calling the Sridevi Bungalow ‘disgraceful’ and ‘rubbish’. Even though the story of the movie does not relate to the later superstar actress but still people are accusing Priya of allegedly sharing similarities to the life and death of Sridevi Ji.

The story of this upcoming movie revolves around a star girl whose name is Sridevi. The reason due to which Twitter handles is slamming Priya Prakash is the poster showing only a pair of legs, dangling on the edge of a bathtub. All of them are connecting this Poster with the incident on How Sridevi Ji Died.

As we all know that last year, Sridevi Ji was found dead in a Bathtub in Dubai and the poster of the movie is also showing the similar situation that’s why this slamming situation occurs for Priya Prakash.

Now only the Twitter Slams Priya Prakash but also according to the reports Mr. Boney Kapoor has also sent a legal notice to the actress and makers of Sridevi Bungalow. 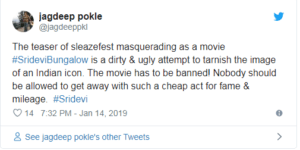 Not only Boney Kapoor but also a user at Twitter Slams Priya Prakash by objecting at the name of the movie, he stated at his twitter handle that “The teaser of sleazefest masquerading as a movie #SrideviBungalow is a dirty & ugly attempt to tarnish the image of an Indian icon. The movie has to be banned! Nobody should be allowed to get away with such a cheap act for fame & mileage.”

Another user at Twitter Slams Priya Prakash, “Such a shameful and disgusting act it is by the makers of #SrideviBungalow to depict the legendary actress in such a disgraceful manner. Utter nonsense and rubbish it is. I want the Indian Film Fraternity to take strong action on it. The departed soul deserves respect.”

An angry Sridevi fan at Twitter Slams Priya Prakash by stating a caption, “I cannot believe this… Not even a full year since she passed away and such movies are being made! I hope it gets banned! At least you could have thought of her two daughters & husband before making such a film! Disgraceful.”

Well, what do you think about the Poster and Teaser Released? Do you think that way Twitter Slams Priya Prakash is right or not? Share your views with. For more updates, stay connected with us…