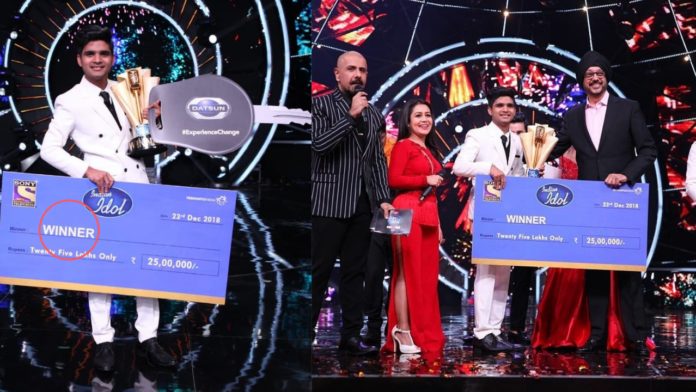 Indian Idol 2018 Winner name has been announced!!! Salman Ali has won Indian Idol 2018 Trophy and get winning prize amount Rs 25 Lakh and a luxurious car of Datsun ready go along with the contract with one of the biggest music company in India “Sony Music Company”.

India’s biggest singing reality show Sony TV Indian Idol Season 10 started on 27th May which auditions were started on 01st May 2018. The premiere of the show aired on July 29, 2018, on Sony TV. The show was judged by the Vishal Dadlani, Neha Kakkar and Anu Malik that were replaced by Javed Akhtar after sometime.

In the grand finale of Indian Idol Season 10, the team of Aanand L Rai’s film Zero that is Shah Rukh Khan, Katrina Kaif And Anushka Sharma had come to promote their film. They had lots of fun there and interact also with the top 5 contestants of Indian Idol 2018.

Apart from the team of Zero, Shilpa Shetty and choreographer Geeta Kapur had also approached there for the promotion of the upcoming kids’ dance reality TV series Super Dancer Chapter 3.

The Indian idol show made much news due to its controversies and gimmicks this time. From proposing Himansh Kohli to judge Neha Kakar on the sets of the show to Anu Malik’s replacement as a judge by Javed Ali due to his #MeToo.

Tejasswi Prakash tells Bigg Boss to get naughty: “Do something baby”

Sanya Malhotra And Varun Sharma Coming Up With A New Podcast

Story of ‘Sidnaaz’ | This song will be released with Shehnaaz Gill after the...