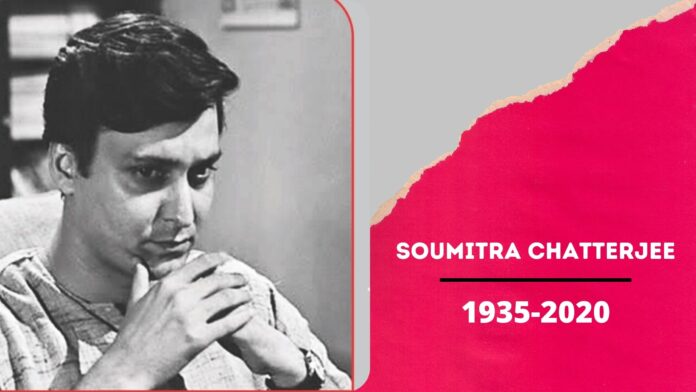 At 12:15 pm, India received the worst and most shocking news. Veteran actor Soumitra Chatterjee has breathed his last at the age of 85. He was admitted to  Belle Vue Clinic, Kolkata on October 6 after testing positive with COVID-19. Although the actor tested negative a week later on October 14, he has been admitted due to other health complications, especially COVID-19-transmitted encephalopathy.

This long time period from October 6 to today, each and every people of Bengal probably prayed for his return to home safe and soundly. But today at noon, the hospital said in their statement that, “We declare with heavy heart that Shri Soumitra Chattopadhyay breathed his last at 12.15 pm at Belle Vue Clinic today (15 November 2020). We pay our homage to his soul,”

‘Feluda’ is no longer with us. This is a huge loss for all Bengali’s and for the whole of India which cannot be recovered. A beautiful door closed to connect with the Golden era. He was born at 19th January, 1935.

One of those Doctors who were treating him stated that, “He is on different life support systems. It seems that our almost 40 days’ fight is not enough to make him well,”. He also added that, “His situation is really grave and critical.”

This great experienced man is not just an actor. He was interested in recitation, painting, theater, literature, and many more. He was a versatile person. Some of his unforgettable films are – ‘Basanta-bilap’, ‘Apur Sansar’, ‘Aparajito’, ‘Sonar Kella’, ‘Joy baba Felunath’,’Charulata’, ‘Devi’, ‘Teen Kanya’ and many more. He was last seen in 2019’s ‘Sanjhbati’. In 2004, he received ‘Padma Bhushan’  by the Government of India. He was also the first Indian film personality conferred with France’s highest award for artists — the Ordre des Arts et des Lettres.

The Bengal government decides to pay homage to him with gun-salute. His last journey will start at 5.30 pm towards ‘Keoratala Maha Shamshan’, where his last rites will be performed. The word is at loss, in the fall of this irreplaceable star of the movie-world. Feluda, wherever you are, rest in peace.