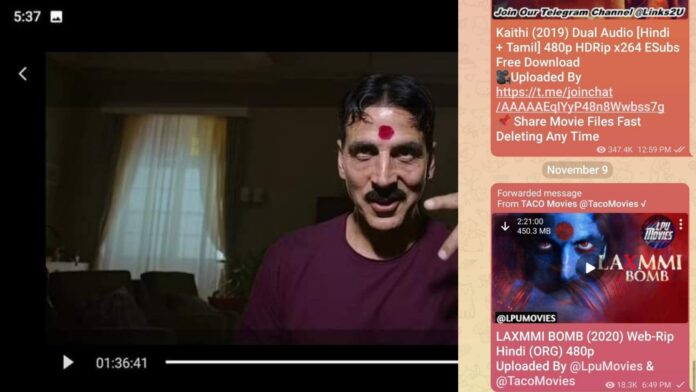 Laxmii, which was earlier titled as Laxmmi Bomb, has been facing issues since a very long time. Firstly, it was supposed to be released on Eid this year, but due to the pandemic, the filmmakers chose to release it online on Disney+ Hotstar. Then a few day prior to the release, Karni Sena sent an official notice complaining that the title of the movie, “Laxmmi Bomb” is a disrespect to Goddess Lakshmi and to the entire Hindu religion.  So the film’s title was changed to Laxmii. Moreover, people have been opposing and boycotting the movie for promoting “Love Jihad” and for Akshay kumar’s statement on the drug menace of Bollywood in which he said that though he can’t deny its presence in the industry, dragging everyone into this drug menace is not good.

Now, a latest and more severe problem has surfaced for the movie as it got leaked by various sources on Telegram and elsewhere ahead of it’s official release on Disney + Hotstar. This is the worst nightmare come true for any movie and is indeed a huge loss for the movie makers. A similar leak incidence had occurred before on twitter, but the user who leaked the movie had to delete it. Let’s see how this leak affects the economic aspect of Laxmii.

The horror-comedy film features Akshay Kumar and Kiara Advani in lead roles, apart from them it also has  Rajesh Sharma, Manu Rishi, Ayesha Raza Mishra, Tarun Arora, and others in crucial roles. Superstar Akshay is playing a transgender for the first time. The film has been directed by Raghav Lawrence and is a remake of a South Indian movie. It is officially being released on Disney + Hotstar today at 7:05 PM.