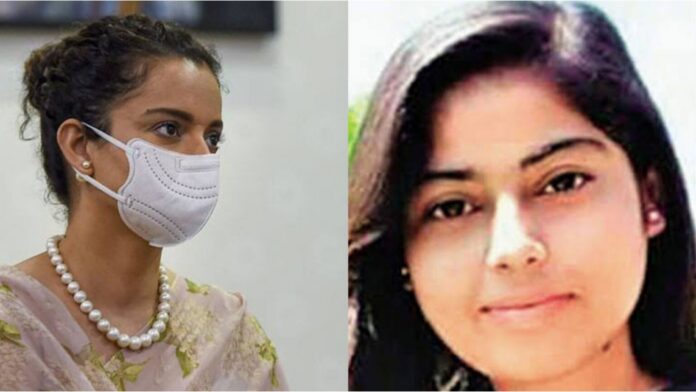 The college student Nikita Tomar Murder Case of Ballabhgarh, Faridabad, adjoining Delhi, has shook everyone. People are very angry about this case. People on social media are considering the case as an angle of love jihad and are demanding punishment for the accused Taufeeq. Taufeeq has also been arrested, he will be produced in court soon. Along with the common people, Bollywood actress Kangana Ranaut has now expressed her anger on this matter and has demanded an encounter for Taufeeq.

Kangana, who has kept her point of view on every issue through Twitter, has asked Nikita for bravery and an encounter for Taufeeq. Kangana wrote in her tweet, ‘Whole world is shocked at what happened in France, still these Jihadis have no shame or any fear of law and order a Hindu girl student shot outside her college in broad day light because she refused to convert to Islam. Immediate actions needed. #weWantEncounterOfTaufeeq’

After this, Kangana made another tweet about Nikita in which she demanded bravery award for her. Kangana wrote in a tweet, ‘Nikita’s bravery is no less than Rani LaxmiBai or Padmavati, jihadi murder was obsessed with her he kept asking her to come with her if she wanted to live she could have given in to his lust she chose to die instead, Devi Nikita rose for every Hindu woman’s dignity and pride.’

The case is that B.Com final year student Nikita Tomar was shot dead by a boy named Taufeeq outside Agarwal College in Ballabhgarh, Faridabad. On Monday evening, It is being told that the accused Taufeeq had been in love with Nikita for a long time. He had talked about marrying Nikita several times, but she refused. Meanwhile, Taufeeq had also planned that he would convert Nikita and marry her.
On Monday, when he came with the intention of kidnapping Nikita, She refused to go with him, he shot Nikita there and ran away.