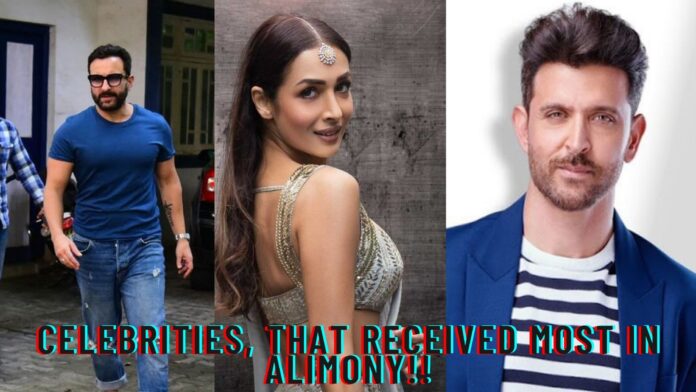 Divorces are never welcoming. They leave a hole in the heart forever. Bollywood has also seen many couples being divorced who were always picture-perfect together. No flaws could ever be glimpsed in them. Let’s talk about such Celebrities who got divorced and received a hefty amount as alimony:

They had a love marriage and were having a boy from it. They both spent more than 10 years being together tied in a nuptial bond. Malaika Arora and Arbaaz Khan were often referred to as Bollywood’s hottest couple. According to Spotboye, a source near to the couple had told, “That’s quite an amount no doubt, but Rs 10 crore minimum is what Malaika wants. And she will not settle for anything lesser.”So, Arbaaz is providing her with an alimony of Rs 15 crore.

Karishma was first engaged to Abhishek Bachchan but later the couple called off their engagement citing to personal reasons. Then she went on to marry businessman Sunjay Kapur but the marriage didn’t last for a long time. The couple eventually got divorced in 2016 and Sunjay’s infidelity was considered as the reason behind this divorce. It was an expensive divorce. As per sources, a lawyer involved in the case said, “Karisma will get Sunjay’s father’s house (in Khar) transferred in her name. Sunjay has to purchase bonds worth Rs. 14 crores for the children, which will attract a monthly interest of around Rs. 10 lakh.” Supposedly, reports also state that Sunjay is paying all the expenses of the kids.

Saif married Amrita who was years older than him against his family’s wishes. They both stayed in the marriage for 13 years and then all of a sudden they got divorced. Saif did pay a hefty price to her for the settlement of divorce. The exact amount is not known to anyone but it is said that half of Saif’s income went into this.

Bollywood perfectionist Aamir Khan and Reena Dutta married against the wants of their parents. But, the couple started gliding apart over time. Temperamental differences are considered as the reason for their divorce. It was also an expensive divorce where Aamir had to give a big amount as alimony to her then-wife.

Prabhudeva was primarily married to Ramlath with whom he has two boys. However, because of the disparities between the two, they singled out and Ramlath settled for one-time alimony of 10 lakh rupees and also two costly cars and property worth Rs. 20-25 crores.

One of the blooming directors of Bollywood Aditya Chopra and Payal Khanna was childhood beloveds. There were many assumptions about the reason for their separation, one among them was Aditya’s closeness with the actress, Rani Mukerji. Whatever the reason, it took a long time for the duo to finalize their divorce. As per the sources, Payal had requested a huge sum as alimony. Finally, they settled the issue, and the divorce was filed, but the exact amount of money was never disclosed.

One of the glamorous real-life love stories of Bollywood turned out in a divorce when actor Hrithik and Sussanne announced their break up. The rumors mentioning break-up in their relationship commenced when Hrithik’s movie, Kites was released. For a long time, the couple told everyone that all is well between them, but they ultimately accepted that something is wrong. Eventually, they separated in 2014, and the alimony that Sussanne stressed was a grand sum of Rs.400 crores. Even though Hrithik refuted this on Twitter, rumors arose that he paid her Rs. 380 crores.

Dutt admired his second wife, Rhea Pillai greatly before she fell in love with the tennis star, Leander Paes. It is speculated that there is no mistake on part of Sanju Baba in this relationship, but he suffered the most. As for alimony, Sanjay Dutt gave her a sea-facing luxury apartment along with an expensive car. He even paid all her bills for a long time.

Kalyana Vaibhogam 02 October 2021 Upcoming Story: The swami suggests a way to revoke the...

What are the benefits of health insurance policy in India?