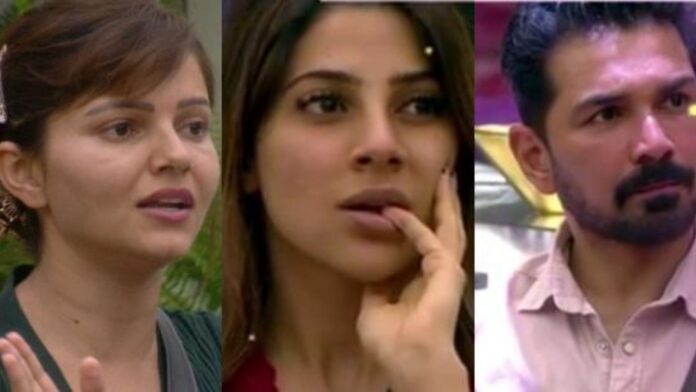 In tonight’s episode, viewers can again witness some major arguments and catfights. And it will be none other than Nikki Tamboli with Rubina Dilaik over household chores. Nikki, being the only confirmed fresher refuses to do any household work, over which Rubina Dilaik knocks her out by saying,” There is a difference between confirmed fresher and a Senior.” She refuses to accept Nikki as a senior.

The whole argument begins from the point where Nikki Tamboli asks Rubina to chop the vegetables properly at Breakfast. Rubina’s husband, Abhinav Shukla interrupts the conversation to back his wife while taunting Nikki for not doing any work. After this, Nikki gets furious and starts yelling at other to stop pointing out her name as she is a confirmed contestant now and said,” Nikki Nikki kyu kar rahe ho, Nikki to ho gayi confirmed”

Rubina Dilaik reminds Nikki Tamboli that she is still a roommate and have to help with house chores like others. Nikki, being her own self did not pay heed to it and leaves the hall. She straight aways goes to the bathroom and starts filing her nails. Tamboli further challenges the other contestants that they can’t make her do any work.

It’ll be interesting to see how the contestants manage to cope-up with all differences between ‘To be confirmed’, ‘Confirmed’, and ‘Senior’.

Do you feel that Jay Bhanushali was being stupid in his stand over the prize money? Vote Now

“It has action on a level we’ve never done before”