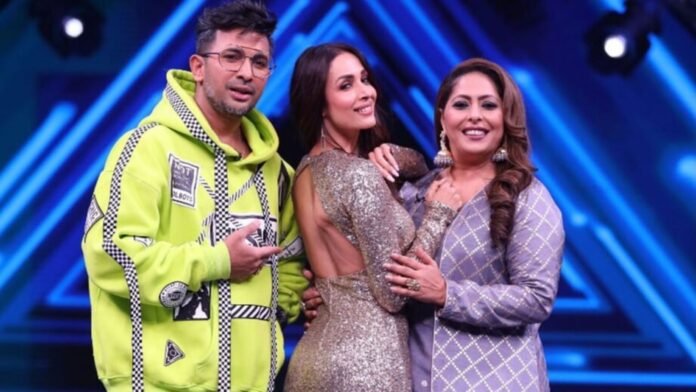 Malaika Arora is back on the set of India’s Best Dancer after weeks. She was tested positive for a novel virus soon after Arjun Kapoor tested positive for the virus. Since then she had been following the guidelines and was staying in isolation. She was self-isolating from her son and dog of which she posted a pic on her official social media handle. She was often seen having a virtual date with her close friends and sister Amrita Arora.

Fans were eagerly waiting for her return on the show especially because of her breathtaking outfits which were a treat to watch for fans. They were soo classy and the grace with which she wears them always served as a cherry on top of the cake.

After three weeks of self-isolating, Malaika finally resumed shooting of India’s Best Dancer. She made a comeback wearing a yellow lehenga by Tarun Tahiliani. She was styled by Maneka Harisinghani. Her outfit was a treat for the eyes. She received a warm welcome on the show by the cast and crew.

Her co-judge Terrence Lewis even dedicated a blog on her which said, “It’s a @malaikaaroraofficial special cause our lady is back after 3 weeks of quarantine, so this week’s vlog is related to that! And our Guest n my favorite folk artist ILA ARUNJI won it hands down! Here is a vlogeshwari question for you… what is pandemic in Hindi called? Comment below! Googling or reading other’s comments is …… allowed!”

Annoyed by dandruff !!! Here is your solution

Divya Agarwal and Varun Sood share love and are kissing smitten of fans!

Bollywood Kissa: When Sanjay Dutt was not caught by his father Sunil Dutt to go...