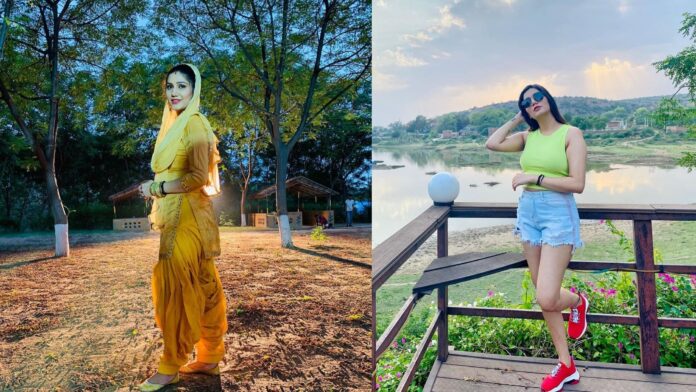 Haryana’s sensation beautiful singer-dancer Sapna Choudhary is now blessed with a baby boy. She has been in the limelight through social media platforms for her killing dancing styles and adorable beauty. She has a big amount of fan circles throughout India along with almost full Haryana.

According to the news, she got married to her boyfriend Veer Sahu, who is also a famous actor in Haryana. Instead of this many of our countrymen questioned Sapna’s character and personal life gatherings. But her husband when announced their little boy’s arrival on a Facebook Live, Tuesday; he mentioned that he is speaking as a family person, somebody’s husband, and doesn’t believe in making his personal life public. Veer though cleared that they got married on New Year’s Eve and due to some family issues they couldn’t get the chance for publicity.

Sapna has done blockbuster music videos like ‘ Desi Desi Na Bolya Kar Chori Ae’ and many others Haryanvi, Bhojpuri, Punjabi, and Bollywood songs. She always keeps her fans awaited for her gorgeous photographs on Instagram too. She regularly updates on her social media.

She became a real well-known face after she became a part of Bigg Boss 11, hosted by Salman Khan. But she is very much famous for her Haryanvi song ‘ Teri Ankhya Ka Yo Kajal’. People invite her to various programs and accommodate madly making a lot of noise only to enjoy her marvelous dance moves in this song.

If you are a fan of books, then definitely read this famous autobiography written by...

Battlefield Mobile beta for Android rolling out soon: Here are the details