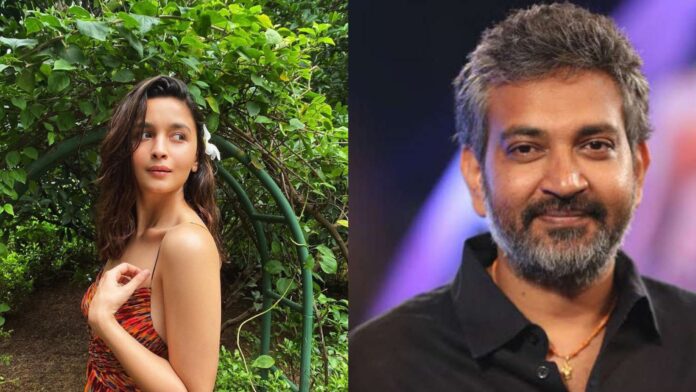 The shooting of the great movie Roudram Raman Rudhiram, which is commonly called RRR as the abbreviated version, has finally started again after a long halt. The film making git disrupted due to the obvious reason, COVID -19. Director SS Rajamouli has successfully pulled off the headline lately. This is because he eventually decided to start again the shooting of the movie. He posts on his twitter with the hashtag #WeRRRBack

Alia Bhatt To Be A Part

Alia Bhatt has already been a part of this enormous project and is ready to be a part of the shooting, as per the news covered by The Times Of India. Reportedly, the actress said that she is “looking forward to joining the team.”
Alia’s Role
As reported by the source from RepublicWorld, Alia is supposed to be playing a small role in the movie. There will be a song that will exclusively be there for Alia Bhatt’s appearance. Also, she will neither be playing the part of the female protagonist nor will get cast opposite to Ram Charan.

The Bollywood actress Alia Bhatt has already shred a video in her twitter handle. The video depicts the scenes straight out of the shooting location. Not only that, the video assured the audience that the team is taking all the necessary precautions that include sanitizing the set as well.
The clip of the video concludes with the rapid glimpses of the lead actors from the movie. although the faces were not pretty visible it shows that the actors were riding a bike and a horse.

From The Producer’s Desk

The producer, DVV Danayya reportedly informed, “Extraordinary times need extraordinary measures. Keeping that in mind, we have resumed work! All this, while keeping in mind the safety protocols that are absolutely necessary in these times. Every member of the cast and crew is sacrosanct and we’d like to ensure they are in a safe zone. Times have changed and the ways we work had to as well. But the passion for films and the excitement to get back hasn’t!”

The release date of the movie will be announced soon after the shooting of the entire movie comes to an end, according to RepublicWorld. Other Bollywood actors like Ajay Devgn will also be seen in the movie. The pan Indian movie, RRR will release in Telegu, Tamil, Hindi, Kannada, and Malayam languages as well.