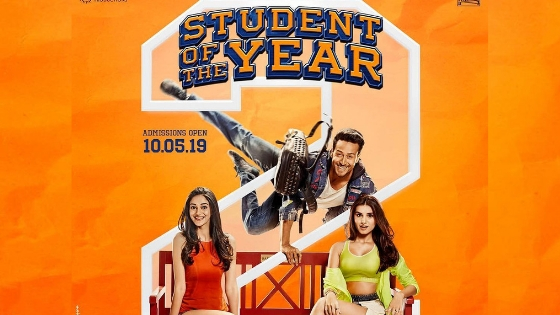 After the super success of Karan Johar’s Dharma Production film Student Of The Year in 2012, Now the Student of the Year 2 is going to be released in May 2019. Karan Johar launched Alia Bhatt, Varun Dhawan and Siddharth Malhotra from ‘Student of the Year’ movie. The movie was good and these three stars also became superhit in the industry. Karan Johar introducing two new faces by this sequel, Actor Chunky Panday’s daughter Ananya Panday and Tara Sutariya are debuting by this movie. There are also Tiger Shroff in the film.

Student of the year 2 trailer

The trailer of the Student of the Year 2 has been released. The film’s trailer has the best cinematography. The scenes of the film are shot on beautiful places, which makes the screen look quite colorful.

Student of the Year 2 Cast

Student of The Year 2 Release Date

The trailer starts from Tiger’s Entry, he can be seen doing lots of action. Seeing the beauty of Tara Sutariya, you will become their fan. on the other hand, bubbly Ananya can be seen in the role of a bold girl. However, nothing new was found in the trailer. The story of the film is similar to the first part, the only difference is that there was a 1 actress 2 hero in that film and it has 2 actresses and 1 hero.

Karan Johar said that the song ‘Ye Jawani Hai Deewani‘ has been recreated for this movie. In the First film, the song ‘Disco Deewane‘ was used. Also, there is an indication that Hollywood superstar Wil Smith will be seen in the Cameo Roll.