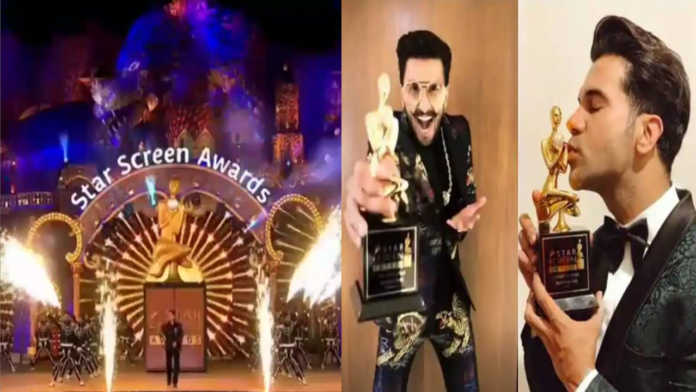 Star Screen Awards 2018 will be telecast on December 31

Every year a ceremony get organized in India with the motive to honor professional excellence in the Bollywood film industry. One of the most predicted events of the year is Star Screen awards. On the basis of ratings from industry and critic actors actress and movies gets nominated and then given Awards.
The original name of Star Screen awards is Screen Award. Bollywood fans are too eager to watch the Star Screen awards 2018 edition on television point the event will be as Grand as every year. 9Several Bollywood celebrities will perform and many talented actors and actresses and artists will be rewarded for their work.
If you are also excited to watch Star Screen awards 2018 then here are the details we have given to bring your excitement to the peak. In this article, you will get to know about the broadcasting details, date, timings and also the list of Bollywood celebrities who will perform in this Grand event.

The 2018 edition of scrap Star Screen Award is going to be on air on television on 31st December 2018. The event that is going to be on air at Star Plus point Bollywood lovers can also enjoy this show online at Hotstar official website point if you are not having the Hotstar application then you may download it by visiting the Google Play Store.
The hosts of Start Screen Awards along with Actors performing this time:
Salman Khan will be the host of Star Screen awards 2018. Along with Salman the popular movie character Stree will also host the show point, unlike every year several Bollywood celebrities will perform on the stage. This time Katrina Kaif is going to set the stage on fire with her amazing performance. Furthermore, Tiger Shroff will also give a bang on stage. Along with these two other Bollywood celebrities including Jacqueline Fernandez, Salman Khan, Shraddha Kapoor, Jacqueline Fernandez, Shahrukh Khan and many more will perform and this Grand event.
Bollywood superstars including Deepika Padukone, Ranveer Singh, Alia Bhatt, Madhuri Dixit, Shah Rukh Khan, along with people from the Bollywood industry will be attending the Star Screen Awards on 31st December 2018.

How to get free diamonds, leaked rewards, and more