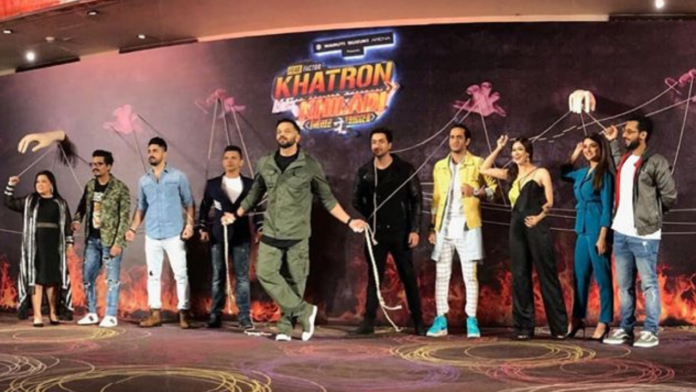 The popular adventure-based reality show is all set to blow the audience mind. Yes, Khatron Ke Khiladi 9 is soon going to be started. Recently a press meet was held in Mumbai where all Khatron Ke Khiladi 9 Contestants arrived. Furthermore, the dashing host of the Show was also present there.

03rd Runner Up of Big Boss 11, Vikas Gupta is also going to fight with his fear in the show.  He won many hearts with his simplicity and mastermind.

The Handsome hunk, Naamkarann actor Zain Imam is also signed by the makers to participate in the show and fight his fear in Khatron Ke Khiladi 9.

Dil Se Dil Tak actress Jasmin Bhasin aka Teni is also going to participate in the show.  After the show went off-air the actress was on a break.

Yeh Hai Mohabbatein fame Romi Bhalla Aka Aly Goni is also going to be one of the contestants in Season 09 of Khatron Ke Khiladi.

After winning many hearts in Jhalak Dikhla Jaa, gorgeous Actress is all set to fight her fear in the show.

Actress Ridhima Pandit, who is famous for her role of Rajni in the show Bahu Humari Rajnikant, is all set to try her hands in this adventure based reality show Khatron Ke Khiladi.

Comedian-actress Bharti Singh along with husband Harsh Limbachiyaa is also going to take part in the show and fight their fear. This is the first couple taking part in the show.

Singer, actor and TV host Aditya Narayan is also going to be a part of the show. He was last seen in Entertainment Ki Raat.

Former Indian Cricketer Sreesanth will also be the part of this show. He was not present at the premiere. He is currently seen in 12th Season of Big Boss and also won many hearts with his real face and simplicity.

Choreographer-actor-dancer Punit Pathak is also set to show his toughness and ability to face the fear.

One of the most loved television actress Balika Vadhu fame Avika Gor will also be seen in the show. Show makers approached this beautiful actress to be a part and show her talent.

Host Of the Show:

Unlike other seasons, this time also Rohit Shetty will host the Season 09 of Kahtron Ke Khiladi

The shooting of the Show:

At the premiere of Kahtron Ke Khiladi held today, Rohit Shetty stated that the shooting of this show is done in Argentina.

The tagline of the Show:

This time the tagline of this popular show is “Jigar Pe Trigger.”

Starting Date of the Show:

According to the sources, the show will go on air at Colors TV from January 5, 2019. The premiere proves that this time audience will be glued to their place while watching the show.

The audience is excited to watch the show and adventure. Are you also waiting for the show eagerly? Please let us know in the below stated comment section. For more updates keep visiting our portal. We will keep you updated.