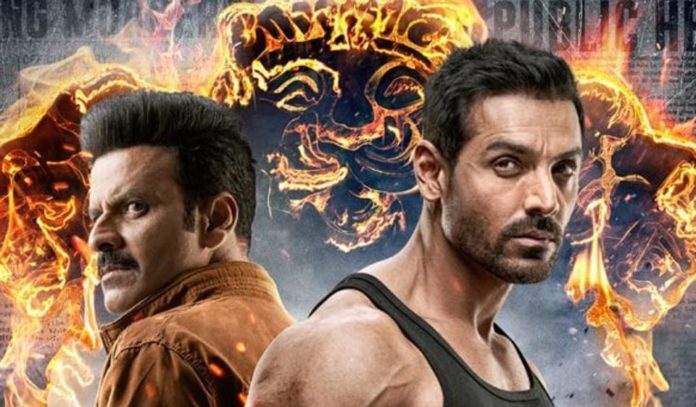 Prior to Satyameva Jayate, John Abraham’s film Parmanu was successful at the box office this year. The critics had summed up John’s work. Now fans of Satyamev Jayate, who came on the occasion of Independence Day, have great expectations.

Director Milap Milan Zaveri is known for his writing. The writer of a famous film ‘Kante’ is also a solder, and sometime before that, he made a film as ‘Mastijade’ which fell on the box office. Now Milap has made Satyamev Jayate according to the typical Bollywood masala film.

Parmanu movie Story starts with Mumbai Location, and the first scene is Veer Rathore (John Abraham) is teaching a lesson to the police officers involved in corruption. There is confusion in the police department. When police officer Shivshash Rathore (Manoj Bajpayee) is captured, he raises some problem behind these incidents. In the meantime, learn (Ayesha Sharma) enters the story of Parmanu movie and there are many other interesting twists comes in stories. At the same time, many secrets are also exposed. The film will have to be seen to know what happens in the end.

Why Can You Watch This Movie?

Why can see the movie: The story of the film is normal. Dialogues have been written in a very strong way, due to which it is interesting to see serial events while narrating the story. The action of the film is tremendous and in such a way the action and dialogues are shown in the trailer, the same type of flavor is also seen in the film. Between John Abraham and Manoj Bajpai, the story of a thief and soldier is very good. The background score of the film is excellent and the style used to finish the corruption is shown in a good way. Manoj Bajpayee once again appears to be doing a strong acting. At the same time, John Abraham, famous for the action, appears completely immersed in the role. The work of Manish Chaudhary and Ayesha Sharma is also easy.

The film’s weak link, its beginning and especially a part of Climax, has been shown quite a long time. He could have been shortened. The role of Ayesha Sharma is not justified in her style. More suspense could have been made in the film. The audience of multiplexes may not be more attracted to the audience, but the singles and applause will be heard in the singles theater. The film has been given an Adult Certificate, which is why every kind of audience might not see it.

The film’s budget is being told about Rs 50 crore. With this, Akshay Kumar’s movie ‘Gold’ has also been released. Although Independence Day is a big weekend due to which the audience will not have much trouble choosing the movie of their choice. It would be interesting to see how much John-Manoj’s film earns in front of Gold.

The family had demanded sweets from Vicky Kaushal on the news of stopping with Katrina...

Throwback Video: Juhi Chawla was seen in this TV serial of BR Chopra, forgot the...

How Much Data Does Spotify Use?