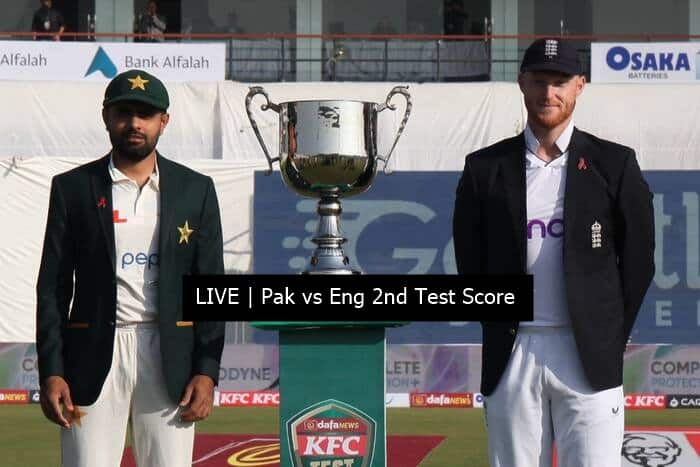 Rawalpindi: Unheralded Abrar Ahmed bagged a rich haul of seven wickets in a dream test debut as Pakistan’s spinners kept England’s aggression in check on the first day of the second test on Friday.

The 24-year-old mystery spinner grabbed 7-114 and got plenty of help from the dry wicket at Multan Cricket Stadium to dismiss England for 281 inside the first two sessions.

England got rid of both Pakistan openers — Imam-ul-Haq and Abdullah Shafique — early before captain Babar Azam’s unbeaten 61 carried the home team to 107-2 at stumps when bad light stopped play with 10 overs still remaining in the day.

Saud Shakeel, who scored a gritty half century in Pakistan’s 74-run defeat in the first test at Rawalpindi, was not out on 32.

Ahmed was surprisingly left out from the first test despite picking up 43 wickets in this season’s first class tournament. He mystified England with his sharp googlies and carrom balls with only Ben Duckett (63) and Ollie Pope (60) scoring rapid half centuries.

Legspinner Zahid Mahmood made a forgetful test debut at Rawalpindi, but finished off the tail just before tea to end up with 3-63 after Ahmed’s brilliance constantly posed challenges to England’s aggression.

Duckett and Pope both scored half centuries in the first session before falling to Ahmed as the legspinner became only the second bowler in test history to pick up five wickets before lunch in his debut test and England reached 180-5.

Leftarm spinner Alf Valentine of the West Indies was the other bowler to do so when he debuted against England at Manchester in 1950.

Ahmed struck off his fifth ball as Babar turned to his mystery spinner as early as in the ninth over after Ben Stokes won the toss and elected to bat.

Ahmed challenged England’s aggression through his variety of bowling on a wicket offering plenty of assistance to the spinners inside the first hour and wasn’t afraid to lure the England batters through his variations.

Zak Crawley (19) was baffled by Ahmed’s sharp delivery which jagged back into him and knocked back his stumps and then the legspinner successfully won lbw decisions against Duckett and Joe Root (8) through television referrals.

Duckett and Pope combined in a 79-run stand off 61 balls and briefly dominated even Ahmed through their extravagant reverse sweep shots before the bowler broke through soon after Duckett had completed his half century.

Allrounder Faheem Ashraf and Ahmed were two of the three changes Pakistan had to make after fast bowlers Haris Rauf and Naseem Shah both were ruled out with injuries, and the home team also dropped experienced No. 3 batter Azhar Ali because of lack of form and brought in allrounder Mohammad Nawaz.

England didn’t slow down and its fearless approach to score at a rapid pace cost them when Pope was caught at point while going for a reverse sweep and Harry Brook gave a skied shot to Nawaz at mid-off against Ahmed as England reached 180-5.