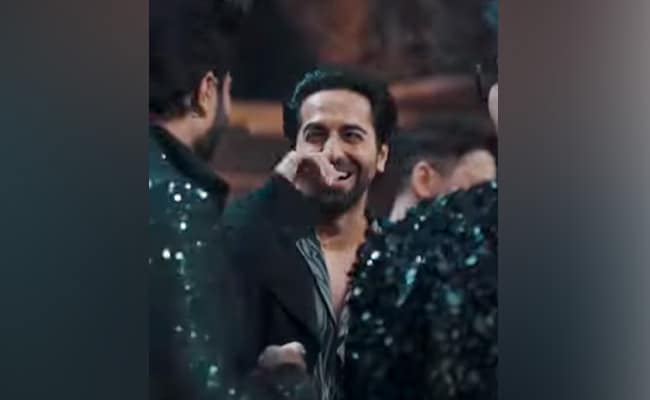 Karan Johar is in throwback mood. So the filmmaker treated us to a video where he is seen on the sets of a reality show along with Ayushmann Khurrana, Madhuri Dixit and Nora Fatehi and others. The video appears to be from the time when Ayushmann and Nora visited the sets of Jhalak Dikhhla Jaa to promote Ek Action Hero. Ayushmann and Nora’s song Jeda Nasha from the film has been added in the background of the video. Additionally, Karan is also seen trying an Instagram trend with Madhuri Dixit which involves dancing with huge glasses on. Sharing the clip, Karan wrote, “Never too late for a throwback! #throwback.”

The reels featuring Karan Johar and Madhuri – a behind-the-scenes look at Karan’s new clip – were shared a week ago with the caption “vibing”.

Karan Johar’s throwback clip comes close on the heels of another video shared by him, this time featuring his kids Yash and Roohi. The clip begins with Karan asking Ruhi, “How are you?” To this she says, ‘I am tired.’ Then Karan says, “It must be very difficult. You are tired. Poor thing.”

He then asks Yash the same question. Dressed in sunglasses, Yash has only one word to say – “Badshah”. A stunned Karan Johar asks, “What? Are you the king? As Yash laughs in reply. Tagging rapper Badshah, Karan Johar wrote in the caption, ‘There is a rapper in our house.’ Shilpa Shetty and Maheep Kapoor replied to the post with heart emojis.

On the work front, Karan Johar will return to direction with Rocky and Rani’s love story. Sharing the release date of the film, Karan wrote: “After seven years, it is time for me to return to my first home- theatres. I had the complete honor of working with not one, but many wonderful actors on the sets of my 7th film. Creating an ensemble cast of family nostalgia, heartwarming music and a story that goes back to the roots of our family traditions. It’s that time again – hanging out with family and friends, buying popcorn and just watching love and entertainment on the big screen. We are overwhelmed and impatiently excited to finally inform…” adding that the film is releasing in theaters near you on April 28, 2023.

The love story of Rocky and Rani stars Alia Bhatt and Ranveer Singh in lead roles.

Why did Sara Ali Khan suddenly share these photos with Sushant Singh Rajput, the reason will make you emotional!

Follow Us
Featured Posts
This is how, Kajol, Hema Malini, Asha Parekh and Raveena Tandon came together for the first death anniversary of legendary singer Lata Mangeshkar
44 mins ago