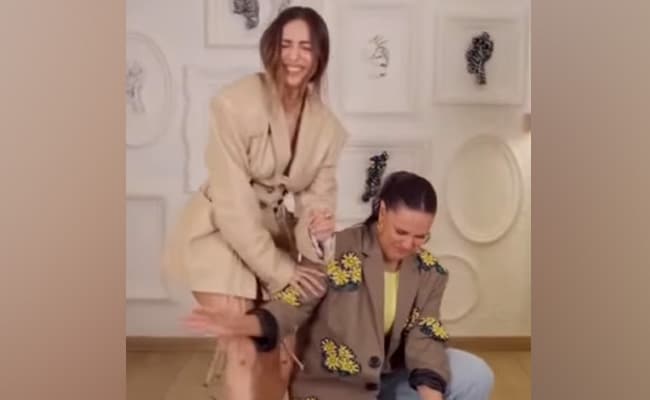 Still from a video. (courtesy: malaikaroraofficial)

Malaika Arora is no stranger to Bollywood chartbusters. In fact, he’s a fixture in most of them. In such a situation, when Malaika and her friend actress Neha Dhupia came under the same roof, there was a lot of dance on some famous Bollywood songs. In a video shared online, Malaika and Neha are seen standing together, waiting for a song to play before doing the hook step. It came as no surprise that the first song was the iconic Chaiyya Chaiyya featuring Shah Rukh Khan and Malaika. Next on the list is Salman Khan’s OO Jaane Jaana and Raveena Tandon-starrer Tip Tip Barsa Pani.

A few days ago, Malaika Arora was also seen dancing with choreographer Farah Khan. Both Chaiyya Chaiyya and Munni Badnaam Hui are grooving, both originally choreographed by Farah and performed by Malaika. The clip begins with Malaika and Shah Rukh Khan from the movie Dil Se. Then, Malaika and Farah begin to perform the hook steps of Munni Badnaam Hui, Chaiyya Chaiyya and Anarkali Disco Chali (from the movie Housefull 2). The video was shared as a promotion for Malaika’s show Moving In With Malaika.

Farah Khan has also appeared in another promo video of the show, in which both are discussing Malaika’s personal life. The clip also features her BFF Kareena Kapoor, who can be heard saying, “I think she (Malaika) is funny, hot, beautiful and she’s rock solid, let’s see if she can protect herself.” lowers.” Sharing the post, Malaika wrote, “The time has come for me to let you all in, shall I lower my security?”

Malaika Arora’s show Moving In With Malaika is currently available for streaming on Disney Plus Hotstar.

Star Kids Qualification: From Aryan Khan to Ishaan Khatter, how educated are these famous star kids?

Teaser of Ratham Starring Vijay Antony Out; Watch it Here