The defending champions, Satara Blue Jays were beaten by the hard hitting Pune Mariners, as the final ended 16-6 in favour of the Mariners. 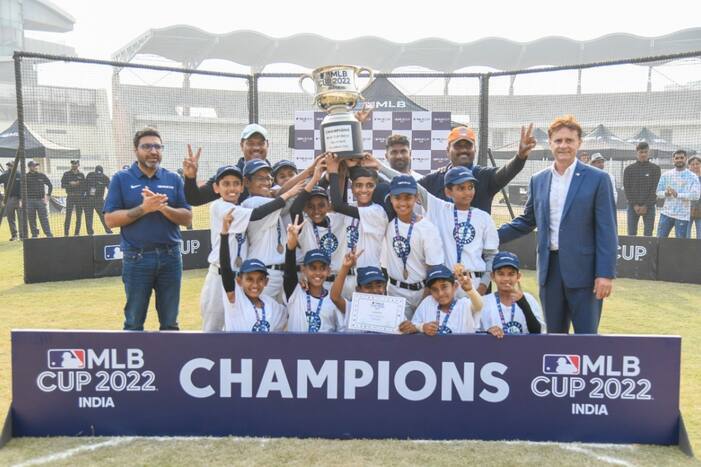 Delhi, 5 December 2022: The final day of MLB Cup India 2022, came to a close with an enthralling final between the Satara Blue Jays and Pune Mariners on the 4th of December at the NOIDA Cricket Stadium. The defending champions, Satara Blue Jays were beaten by the hard hitting Pune Mariners, as the final ended 16-6 in favour of the Mariners.

The two teams reached the final after gruelling semi-finals. The Pune Mariners beat the Kolhapur Braves 14-8 in the first semi-final of the day. The second semi-final took place between Ahmednagar Dodgers and Satara Blue Jays ended, 8-7 in the Blue Jays favour.

Dinesh Patel, a former pitcher for the Pittsburgh Pirates organization conducted a clinic for the three teams that are a product of MLB First Pitch, a program designed to implement baseball in school’s physical education programs. Patel said, “I had great fun watching the games today. I was here last year too and the level of these young athletes has gone up considerably. All I can hope now is that they keep improving at this rate because then very soon India will start producing the next generation of Baseball stars.”

Rick Dell, General Manager of Baseball Development MLB Asia, spoke about the elite displays he saw at MLB Cup India 2022, as he said, “Today’s finals were outstanding. You could have come here today and closed your eyes and witnessed today’s finals because you could just hear the passion and the excitement and the enthusiasm in the air all day long.”

He went on to add why MLB Cup is such a special initiative as he said, “I am glad we have come up with a way to combine fun and passion to give these boys and girls the opportunity to play Baseball and even perform in it. With good academics in the classroom, I am sure a lot of the players here today will come to realize that Baseball can serve as an essential life tool. I see a lot of young competitors here today who in my opinion will one day play in Major League Baseball.”

David Palese, Baseball Development Manager, MLB India echoed the sentiment as he said, “I think it was a great example of the level of baseball and the enthusiasm and the excitement that these kids have for playing the game and you know the intensity and the fun as well. This was a perfect display.”

The Business Development Manager, MLB India, Ryo Takahashi also spoke about the final day of the MLB Cup India 2022 with jubilance as he said, “We are very pleased with the energy, the passion and the positive feedback we received from our participants. It started when they arrived with wide eyes and big smiles and it ended with smiles.”

He went on to talk about the level of competition being significantly better as he said, “it was evident that coaches and teams that experienced the first MLB Cup had made adjustments and improvements to better perform in 2022. We take this as a positive sign, that if we can continue to increase participation in the MLB Cup, a greater impact will be made in the baseball community here in India.”

“MLB Cup is a crucial initiative for MLB India as we increase participation through our introductory program, the MLB First Pitch. MLB Cup serves as our next stage of development creating retention for baseball in the Indian baseball community.”, said Ryo while talking about the significance of the MLB Cup here in India.

He signed-off by mentioning the enthralling final that saw the Pune Mariners being crowned champions at the end of it, “The Satara Blue Jays were extremely close to winning back-to-back championships but were beaten by an energetic Pune Mariners. The team from Pune took their revenge against a Satara squad who beat them in the finals last year. I hope this storyline is the first of many to come through MLB Cup India.”

MLB Cup also made sure to highlight the players and teams that put in exceptional displays on and off the field with accolades. The Hank Aaron Award, which is presented to the best Hitter at the youth tournament, went to Parth from the Satara Blue Jays. The Cy Young Award, which is awarded to the best pitcher at the youth tournament, was awarded to Om Adsule of the Pune Mariners. Vedant of the Pune Mariners was adjudged to be the Most Valuable Player of MLB Cup India 2022. The team coached by Vinita Tiwari and Jitendra Shinde, Indore Padres was awarded the Sportsmanship Award, for their exceptional conduct on and off the field of play.

Sapthami Gowda to Srinidhi Shetty, Kannada Divas Who Rose To Pan-India Fame In 2022