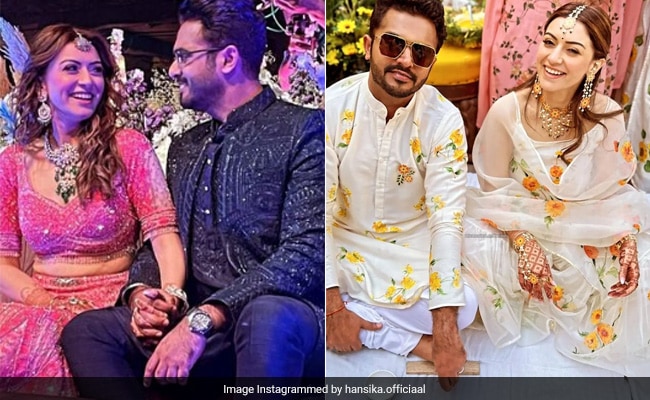 Hansika Motwani is all set to tie the knot with her long-time boyfriend Sohail Khaturia on December 4 in Rajasthan. Before their marriage, many pictures of their Mehendi and Sangeet Ceremonies are going viral on the internet. Hansika and her fiance Sohail are twinning in floral white outfits at the Haldi ceremony. Hansika accessorised her look with statement jewellery, while Sohail could be seen sporting a pair of sunglasses to complete his look. For her sangeet ceremony, Hansika can be seen in a traditional pink ensemble with emerald accessories. Whereas, Sohail is looking handsome in black sherwani.

First look at the pictures from Hansika Motwani’s Haldi ceremony:

Hansika Motwani and Sohail Khaturia’s pre-wedding party had a white theme. Hansika opted for a dazzling, beaded white gown while Sohail could be seen in a white tux. Check out the pictures below:

Hansika celebrated her bachelorette in Greece with her friends before getting married in Jaipur. She shared a video on her Instagram handle and captioned it as “Best Bachelorette Ever #blessed with the #best (red heart emojis)”.

Hansika Motwani and Sohail Khaturia will be married on Sunday evening at Mundota Fort in Jaipur. Rajasthan Rajasthan. The couple will have an intimate yet lavish wedding in the presence of their family members and close friends.

This is how Sohail proposed to Hansika

Meanwhile, on the work front, Hansika Motwani will be next seen in Partner, 105 Minutes, My Name is Shruti and Rowdy Baby. Also he has two web series Nasha and MY3.

Ayushmann on media trial scene in film: “Relatable and topical”