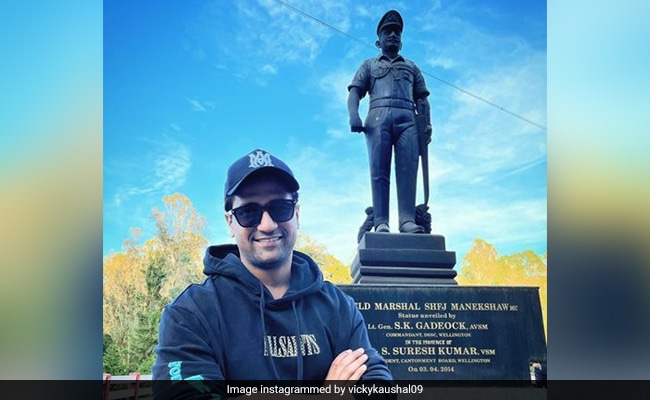 Vicky Kaushal is back with another interesting post on social media. Its connection is with his upcoming film Sam Bahadur. The Raazi actor, who plays the lead role in Sam Bahadur, a biopic based on the life and times of Field Marshal Sam Manekshaw, shared a picture of himself. Vicky is seen posing next to the statue of Sam Manekshaw. Dressed in a black hoodie, Vicky Kaushal accessorised his look with a cap and black sunglasses. For the caption he wrote, “SAM.” Directed by Meghna Gulzar, the film is all set to hit the theaters in December next year. Meanwhile, impressed with the picture, Vicky’s fans bombarded him with red heart and fire emojis in the comments section.

Earlier Vicky Kaushal had shared a post revealing the release date of Sam Bahadur. In the clip, he is seen in uniform, with his back to the camera and two columns of soldiers on either side of him. The video ends with the text, “In theatres. 01.12.2023.” He wrote, “365 days left…#Sambahadur in cinemas 1.12.2023.”

Vicky Kaushal is very excited about Sam Bahadur. After working “tirelessly” for over two months across five cities, he shared a post with pictures and videos from the sets of the film. This is to mark the schedule wrap of the film. In the very first picture, Vicky is seen smiling with director Meghna Gulzar. Both are wearing pullovers with “Sam Bahadur” written on them. The following pictures and a video show Sam Bahadur’s team celebrating the end of the schedule. Vicky wrote, “After more than two months of tireless work across five cities…the schedule of Bahadur comes to an end. Few more cities and few more months to go. See you soon team, to continue our journey of making Sam Bahadur.”

Giving a few glimpses of the preparation for Sam Bahadur, Vicky Kaushal shared a picture of the script with a diary and pen and a few pictures of Field Marshal Sam Manekshaw. Vicky said, “Here it is… preparations begin.”

Sam Bahadur will also feature Sanya Malhotra and Fatima Sana Shaikh. Vicky Kaushal revealed this through a special birthday post for Meghna Gulzar last year. Welcoming Sanya and Fatima to the team, Vicky wrote, “It’s a very special day for us as we celebrate the birthday of our director Meghna Gulzar and the lead ladies Sanya Malhotra and Indira as Sillu Manekshaw.” Sam Bahadur welcomes Fatima Sana Shaikh into the family as Gandhi. ,

Setback for Apple on iPhone 14