Alia Bhatt and Ranbir Kapoor are enjoying a new phase in their life after welcoming a baby girl. While wishes have been pouring in for the couple and their little princess, recently they received an adorable gift from their designer friend Anaita Shroff Adajania.

On Friday evening, Alia took to her Instagram stories and shared a picture of special customised handcrafted quilts. While one of those quilts had ‘Alia & Ranbir’ written on it, the other one read, ‘Raha’. There were cute animals and infinity motifs carved on quilts too. Sharing the picture, Alia wrote, “Thank you my dearest @anaitashroffadajania @purkalstreeshakti.” 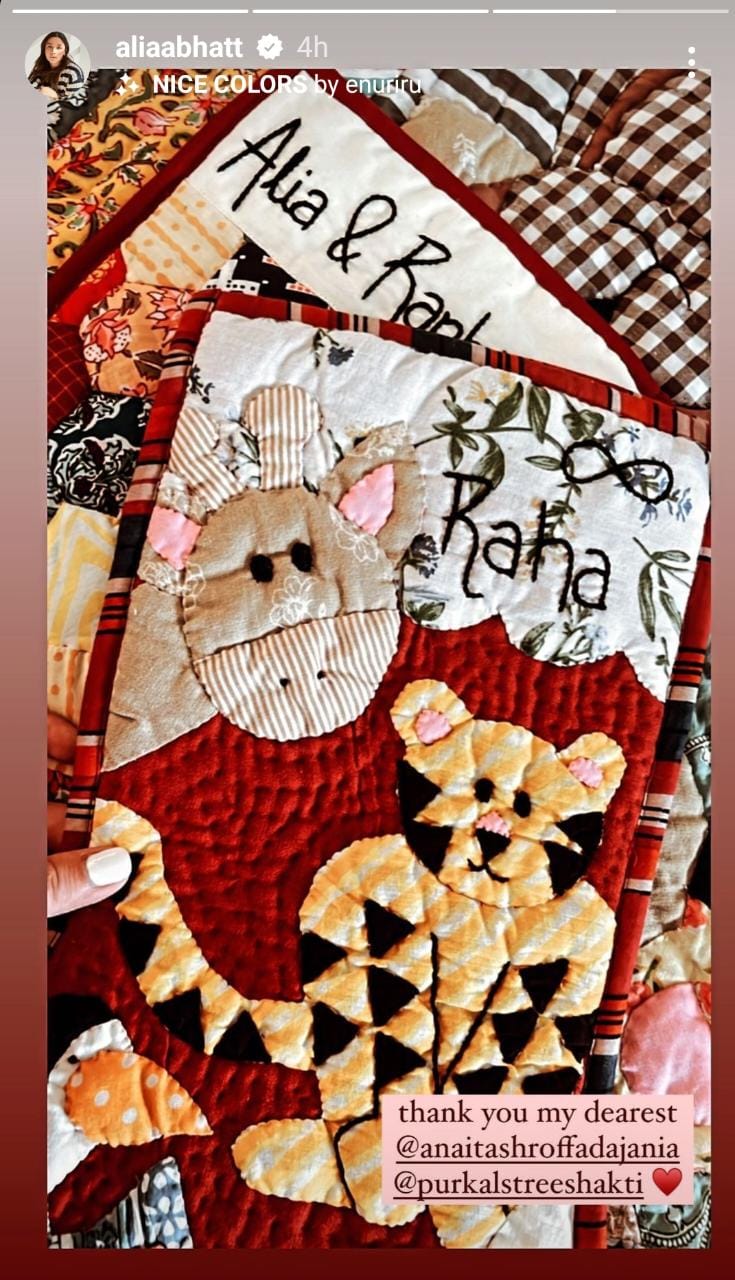 Alia Bhatt and Ranbir Kapoor welcomed their daughter on November 6 at Mumbai’s HN Reliance Hospital. Soon after the delivery, Alia took to her official Instagram handle and called her little princess ‘magical’. “And in the best news of our lives… Our baby is here, and what a magical girl she is. We are officially bursting with love – blessed and obsessed parents!!! Love love love – Alia and Ranbir,” the joint statement issued by the couple read.

Later, in another post, Alia Bhatt revealed the name of her baby daughter and shared why they chose to keep the name ‘Raha’. “The name Raha (chosen by her wise and wonderful Dadi) has so many beautiful meanings… Raha, in its purest form means divine path in Swahili she is Joy, In Sanskrit, Raha is a clan, In Bangla – rest, comfort, relief, in Arabic peace, it also means happiness, freedom & bliss. And true to her name, from the first moment we held her – we felt it ALL! ❤️” she wrote.

On the work front, Alia was last seen in Ayan Mukerji’s Brahmastra which also starred Ranbir Kapoor, Amitabh Bachchan, Mouni Roy and Nagarjuna in key roles. Next, Alia will mark her Hollywood debut with Heart of Stone along with Gal Gadot, Jamie Dornan, Matthias Schweighofer and Sophie Okonedo. She also has Karan Johar’s Rocky Aur Rani Ki Prem Kahani with Ranveer Singh in her pipeline. Besides these, she will also share the screen with Priyanka Chopra and Katrina Kaif in Jee Le Zaara.

Dipika Kakar on Islam: Deepika changed her name after converting to Islam, is the actress happy to be Faiza Ibrahim?

The grandeur of Suryagarh Palace’s suites and havelis where SidKiara are getting married cost up to Rs. 1.1 lakh per night
8 hours ago