Aus vs WI: Following the day’s play, Smith had a laugh about it and admitted that he did not know that the umpire was standing right behind him. 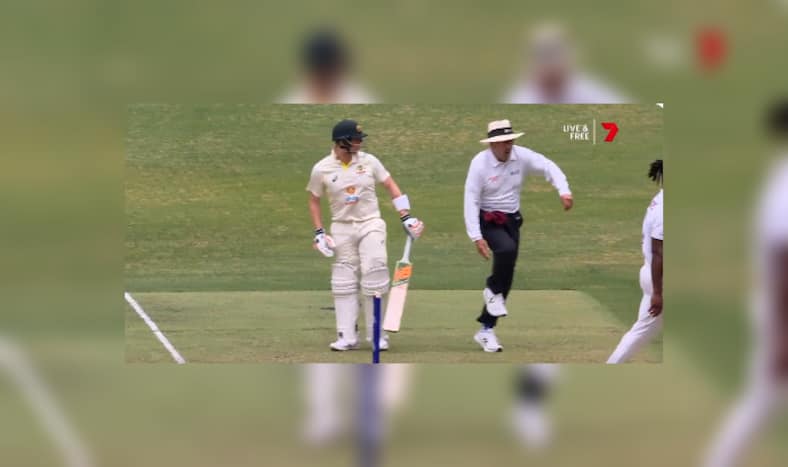 Perth: Steve Smith gave us a glimpse of why he is rated as one of the finest Test batters in the world today. Smith hit an unbeaten 200* on Thursday against West Indies in the ongoing first Test at Perth. The former Australian captain’s double ton has put the hosts in the driver’s seat. Despite his glorious knock what caught the attention of fans was a moment in the match when Smith accidentally hit the umpire with the bat at the non-striker’s end. Rod Tucker was taken by surprise as Smith unknowingly hit the umpire.

Following the day’s play, Smith had a laugh about it and admitted that he did not know that the umpire was standing right behind him.

“I’ve changed a couple of things. My grip’s a bit more open, I’m staying a bit more side on…”

An extended chat with Steve Smith after his 200* on Day 2 in Perth #AUSvWI pic.twitter.com/eeVDtIl4zT

Smith walked into bat after Usman Khawaja perished and then stitched a record 251-run stand with Marnus Labuschagne to put Australia in the driver’s seat. His century was laced with 10 boundaries. With his 29th Test ton, he equaled Sir Donald Bradman for the number of centuries in the longer format. Also, the ton happened to be Smith’s 41st in international cricket. He equaled India captain Rohit Sharma in the most number of international centuries by an active cricketer.

During the lunch break on the second Day 2, Smith spoke on the sidelines and admitted that he enjoyed batting with Labuschagne and was feeling good to have equaled Bradman.

“That was a lovely partnership, we enjoy batting together. We just chill out in the middle and do our thing. Unfortunately, Marnus nicked off, but helluva innings. The wicket sped up a bit today. I think there’s enough there if you put it in the right spot. I’m feeling good. (On equalling Sir Don Bradman with 29 Test hundreds) He was the greatest to play our game. Nice to be on 29, hopefully a few more to come,” Smith said during the lunch break on Day 2.

Huma Qureshi Gets Trolled For Her Cut-Out Dress At Monica, O My Darling Success Party