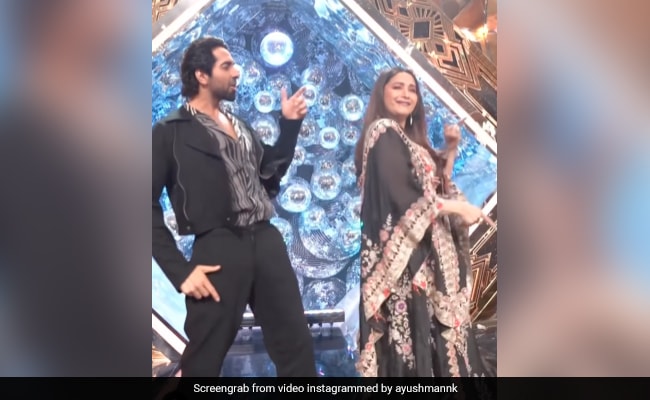 Ayushmann and Madhuri in a scene from the video. (courtesy: ayushmanak)

Ayushmann Khurrana is trying his hand at a new genre with the upcoming action film N Action Hero. As part of the promotions, the star visited the sets of Jhalak Dikhhla Jaa 10, a dance reality show featuring Bollywood superstar Madhuri Dixit as a judge. It comes as no surprise that upon meeting Madhuri Dixit – who is considered one of the best dancers in Bollywood – Ayushmann took the opportunity to shake a leg with her. The duo shared a video of them dancing to the remix version of Aap Jaisa Koi, which featured in N Action Hero. Sharing the video, Ayushmann said, “Aap jaisa koi… hi nahi madhuri dixit ma’am [There is no one like you], #AnActionHero in cinemas this Friday.” Responding to the post, Ayushmann’s brother and actor Aparshakti Khurana wrote, “Baat ban gayi hai.”

Earlier, Madhuri Dixit also danced her heart out with actor Vicky Kaushal, who appeared on the reality show to promote his film Govindam Na Mera. Both the artists danced to Kishore Kumar’s song Mere Saamne Wali Khidki Pe. However, the clip features a cover of singer Sanam Puri and Madhuri Dixit and Vicky Kaushal are seen doing some sexy moves. Sharing the video, Madhuri Dixit wrote, ‘Lots of fun and amazing performance with very special guests…’

N Action Hero, directed by Anirudh Iyer, is co-produced by Bhushan Kumar, Krishan Kumar and Aanand L Rai. The film is all set to hit the theaters on 2 December. It stars Jaideep Ahlawat alongside Ayushmann Khurrana.

Monica, Patralekhaa-Rajkummar, Huma and others at O ​​My Darling Success Bash

Rishabh Pant Cannot be Sent Ahead of Suryakumar Yadav