Rashford opened the scoring with a powerful 50th-minute free kick, although he doesn’t usually take set pieces for England. 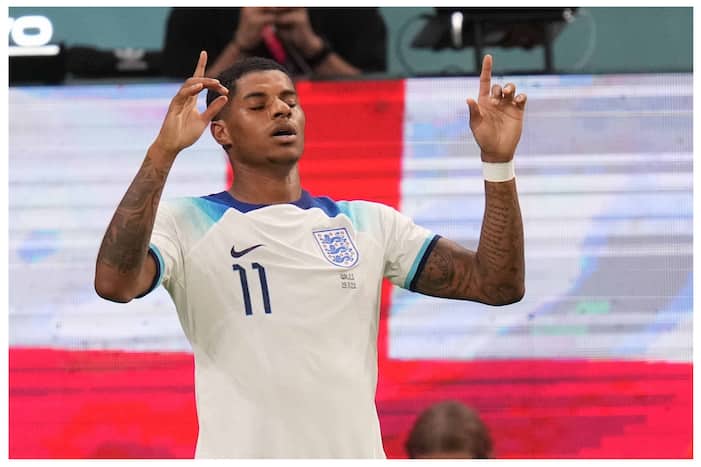 Doha: England striker Marcus Rashford explained his special goal celebrations after scoring twice to help England to a 3-0 win over Wales in the World Cup on Tuesday night.

The forward had his hands in an upwards gesture after his goals and was asked about it when he spoke to the press after the final whistle.

“Unfortunately, I lost a friend a couple of days ago after a long battle with cancer. I am pleased to be able to support him. He was a great person who came in my life,” he said.
The striker was also asked about England’s reaction after a disappointing 0-0 draw against the United States in their previous game.

“We were a little bit disappointed after the U.S. result. Thought we could’ve played a lot better and it was important to have a good performance the next game. We defended brilliantly in the first half and it was just about killing the game off early and taking the chances in the game,” he said.

He opened the scoring with a powerful 50th-minute free kick, although he doesn’t usually take set pieces for England.

“I fancied a free-kick in the first half but it was a better position for the second. I just tried to be calm and execute what you’ve done in training,” he said.

Rashford also explained that coach Gareth Southgate had told players at the break that they needed to get in more shots, saying “the manager said we’ve played well but we need more shots on goal. I think we only had two or three. We wanted to work the keeper more and get into dangerous positions.”

He also looked forward to the last-16 tie against Senegal.

“Moments like this, this is what I play football for. The biggest moments, the best moments. I’m happy we are going through to the next round of the tournament because I have massive ambitions for this team and I think we can play even better than we did today,” he concluded.