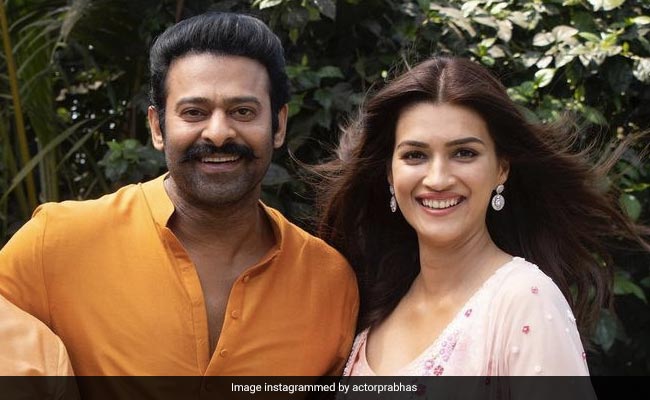 Kriti Sanon and Prabhas are creating a huge buzz on the internet after Varun Dhawan hinted at Kriti’s relationship status. Bhediya stars Varun and Kriti recently visited Jhalak Dikhhla Jaa finale to promote their film. In a video going viral on social media, Karan Johar can be seen asking Varun about some list, why Kriti’s name is not there in that list. To this Varun replies, ‘Kriti was not named because Kriti’s name is in someone’s heart. There is a man who is not in Mumbai, he is currently shooting with Deepika Padukone. Because his name is in someone’s heart. The man is not in Mumbai as he is currently shooting with Deepika Padukone.”

Well, Varun Dhawan didn’t name the actor but looks like Varun is hinting at Prabhas as he will be seen opposite Deepika Padukone in the project.

Kriti Sanon and Prabhas will be seen together in Adipurush, which will also feature Saif Ali Khan and Sunny Singh. Helmed by Om Raut, Prabhas will play the role of Ram while Kriti will be seen as Sita. The film is set to release in theaters on June 16, 2023.

Meanwhile, Kriti Sanon also has Shehzada opposite Kartik Aaryan and Ganpat opposite Tiger Shroff. Prabhas, on the other hand, has Salaar with Shruti Haasan and Prithviraj Sukumaran and projects with Deepika Padukone, Amitabh Bachchan and Disha Patani.

Varun Dhawan’s day out with fans

Yami Gautam Gets 'Love, Luck, Hugs and Kisses' From Husband Aditya Dhar On Her Birthday