IFA had shared the viral photographs of the giant cutouts of Neymar, Cristiano Ronaldo, and Lionel Messi that had been put up by ardent supporters on the banks of a river in Kerala’s Kozhikode district. 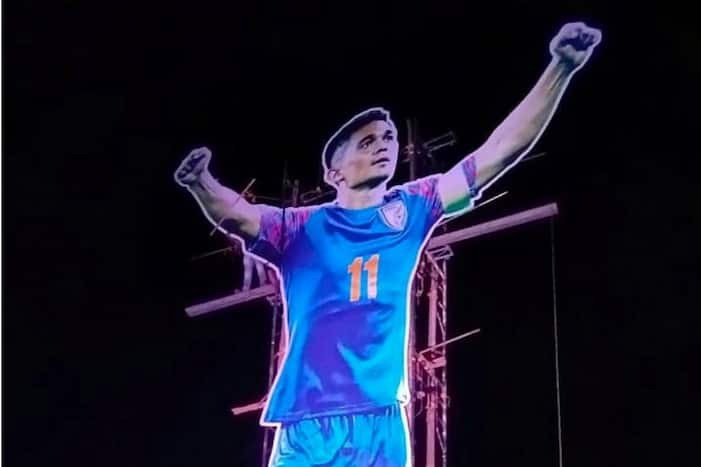 Qatar: The anticipation for the FIFA World Cup in Qatar is palpable, and it can be seen in every nook and corner of India. The football frenzy seems to be a notch higher in Kerala as the coveted tournament nears its inception. After putting up huge cut-outs of international football megastars, the Malabarians have decided to hail one of their own as they set up a massive cutout of the Indian football captain Sunil Chhetri at Pathramangalam,a small village in Thrissur District. This village contributed an excellent football player Mohammed Shafeeq to the Indian football team who were the champions of the 1998 Bristol Freedom Cup held in Sri Lanka. The captain of that winning team was Mr.Pappachan who is also from Kerala.

Ashraf Pathramangalam who is behind this concept and lead the crew to put up this giant cut-out of Sunil Chhetri in Pathramangalam expresses his hope that India will definitely play in FIFA World Cup one day.” The day when India plays in a platform like a world cup is not so far. The truth is that the Indian football team has not got enough consideration. Then how can we hail for another team? Surely India will play in the world cup one day. We all are waiting for that day” he said.

Even though India is widely regarded as a nation crazy for Cricket, it has a massive fan base that follows football. Though the Indian football team isn’t as successful as their cricket counterparts, Indian fans love their team, especially their vibrant skipper Chhetri.
Earlier FIFA had shared the viral photographs of the giant cutouts of Neymar, Cristiano Ronaldo, and Lionel Messi that had been put up by ardent supporters on the banks of a river in Kerala’s Kozhikode district. Though India will not be a part of the FIFA World Cup this did not stop the fans from putting up a 52 feet long cut-out of Chetthri at Pathramangalam Village in Thrissur District.

Chhetri has been the talisman for Indian football for more than a decade. The star forward is the all-time top goal scorer for India. He also has the third-highest goals among active players, behind only superstars Ronaldo and Messi. Chhetri currently plays for Bengaluru FC in the Indian Super League (ISL).

Meanwhile, Chhetri’s Indian team has failed to mirror his success. The Indian Tigers find themselves in 106th place in the FIFA rankings and are far from qualifying for the coveted FIFA World Cup anytime soon. However, India have made gradual progress and improved significantly since head coach Igor Stimac took charge. Stimac and his men will now be heading to the Asian Cup and will look to reign supreme in the tournament slated for later this year.

The FIFA World Cup will be underway in Qatar on November 20. Though India will not be a part of the mega-tournament, fans will be rooting for their favorite nations to lift the coveted trophy. South American nations Argentina and Brazil have a great fanbase while Ronaldo’s Portugal and defending champions France also have their admirers in India. It will be a six-week-long spectacle in Qatar, and it’ll be intriguing to see which team takes home the prestigious trophy this time around.

Labour Ministry To Set Up Inquiry After Spate Of Resignations, Says Report