Kareena Kapoor Khan and Jeh Ali Khan have a blast together.

After wrapping up her project with Hansal Mehta in London, Kareena Kapoor Khan is on a much-needed break. The actress, who recently returned to Mumbai, was seen enjoying her Friday night watching Harry Potter with her son Jeh. A few hours ago, Kareena dropped a glimpse of how her Friday night went on her Instagram stories.

The photograph shows Kareena watching Harry Potter in her living room which is surrounded by books. One can see the Laal Singh Chaddha actress resting her feet on the table in front of her. The picture also shows Daniel Radcliffe’s visual on the TV screen. “Friday nights are for Harry Potter and….(smiling face with hearts emoji)” Any guesses what the Potterhead is referring to?” Kareena penned the caption along with the picture. 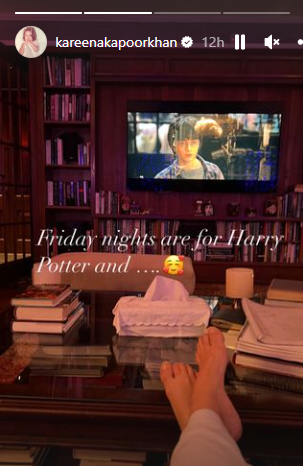 Kareena even went on to share a fun picture from her Friday night. It was a blurred selfie with her younger son Jeh. The caption which was in continuation to the previous one read, “Blurry selfie with Ma boy (red heart emoticon)” On the work front, Kareena Kapoor Khan is all set to mark her maiden production venture with Hansal Mehta’s untitled crime thriller. After making a comeback from her brief hiatus with Laal Singh Chaddha, now the actress has several films in her kitty. Kareena is gearing up to make her digital debut with The Crew. The Netflix film is a remake of The Devotion of Suspect X in which she will be sharing the screen space with Kriti Sanon and Tabu. Furthermore, she has a film helmed by Karan Johar, Takht, in her pipeline. The film co-penned by Sumit Roy and Hussain Haidry will also star Alia Bhatt, Janhvi Kapoor, Ranveer Singh, Vicky Kaushal, Anil Kapoor, and Bhumi Pednekar in pivotal roles.