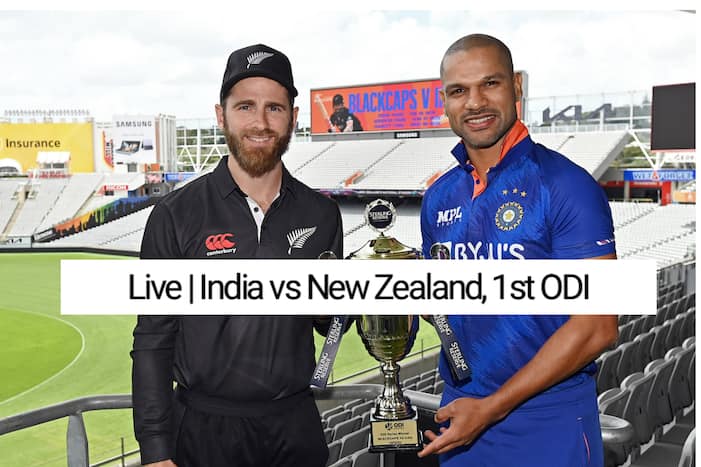 LIVE | Ind vs NZ 1st ODI Score, Auckland: Shreyas Iyer top-scored with 80 off 76 balls while captain Shikhar Dhawan and Shubman Gill struck 72 and 50 respectively in their fourth hundred-plus stand as an opening pair this year to propel India to a challenging 306/7 in 50 overs in their ODI series opener against New Zealand at Eden Park on Friday.

On a drop-in pitch where batting wasn’t easy initially, India were aided by Dhawan and Gill having a solid opening stand of 124 in 23.1 overs after overcoming a slow start. Despite India losing four wickets for 36 runs in the middle stage of the innings, Iyer got India running towards a huge total by stitching a 94-run stand with Sanju Samson (36).

Washington Sundar applied finishing touches for India with an unbeaten blitz of 37 off 16 balls, smacking three fours and as many sixes to take India past 300 as 96 runs came off the last 10 overs. For New Zealand, Tim Southee and Lockie Ferguson took three wickets each while Adam Milne had a scalp to his name.

Pushed into batting first, Dhawan got the innings going with a beautiful straight drive down the ground and hit three more fours in the power-play. With the pitch not being an easy one to bat on, New Zealand were able to keep him and Shubman Gill in check throughout the power-play, though the latter tonked Matt Henry over long-on for six and used his pace to ramp another maximum over keeper’s head.

Gill brought up India’s fifty in the 13th over with a delightful cut, but India needed Dhawan to up the ante. That happened when he cracked a cut through backward point off Ferguson in the 15th over and ended the over with a nice chip through mid-wicket to collect back-to-back fours.

He then feasted on width provided by Adam Milne in the 19th over, cutting twice uppishly to amass a brace of fours. Dhawan got his fifty when he heaved over long-on for four off Milne in the 21st over and four balls later, brought up the century of the opening partnership by ramping over keeper’s head for four.

Three overs later, Gill would reach his half-century as India reached 124/0 in 23 overs, as the duo collectively hit 34 runs in last 18 balls of the innings. But New Zealand made a comeback as Lockie Ferguson broke the opening partnership by having Gil flick straight to deep square leg.

In the next over, Dhawan sliced straight to backward point and became the 200th ODI wicket of Tim Southee. Iyer had a charmed start, surviving an lbw appeal and dropped by keeper Tom Latham while trying to ramp a short ball over his head. Ferguson got the momentum in New Zealand’s favour when he had Rishabh Pant chopping on to his stumps and in-form Suryakumar Yadav edging within four balls of the 33rd over.

Iyer then pressed the accelerator with his trademark slash, loft and pull off the front foot, to get his fifty. At the same time, he found an able ally in Samson, who found most of his boundaries by using pace from the bowlers to dab or flick and find the gaps with ease.

Though Samson holed out to fielder in the deep off Milne, Washington stepped up by smacking Southee over wide long-on for six and then ramped Milne for another maximum over third man. He then hit Henry for two fours and a six in the 49th over, before hitting another boundary in the final over to take India past 300 despite Iyer and Shardul Thakur falling on the either side of it.