Anushka Sharma penned a heartfelt birthday wish for former Indian cricket women’s team captain Jhulan Goswami as she turned 40 today. “Happy Birthday Champ! It’s been such a privilege to know you. You are a generation-defining cricketer who leveled the playing field for women cricketers in India. More power to you!” the Chakda ‘Xpress actress wrote. 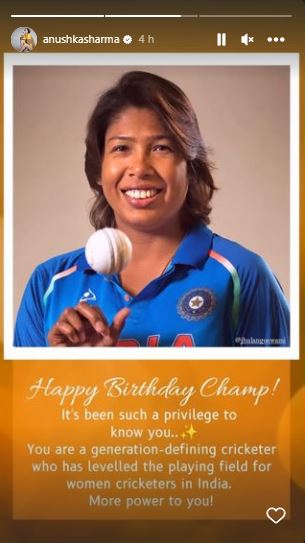 Jhulan was quick to respond to Anushka’s birthday wish. She reshared her post and said, “Thanks a lot fav” along with a heart and angel emoticons. Previously, Anushka Sharma paid tribute to the legendary Indian pacer ahead of her farewell match. “An inspiration. A role-model. A legend. Your name will be etched in history forever Thank you Jhulan Goswami, for being a game changer in Indian Women’s Cricket,” she had written.

Talking about the film Chakda ‘Xpress, Anushka Sharma will be essaying the role of Jhulan Goswami, who rose above hurdles like misogyny, politics, and discrimination along her way to becoming an inspiration for an entire generation of sportswomen. She will be seen alongside Renuka Shahane, Anshul Chauhan, Koushik Sen, and Mahesh Thakur in Prosit Roy’s directorial.

Earlier, Anushka told IANS, “We had a great shooting experience (in Kolkata) and made memories that will last a lifetime. Jhulan is an icon of India, as well as of West Bengal, and shooting the film in Kolkata and various parts of the state, is a fitting tribute to her legacy and her journey that started here.”

The Netflix original film Chakda ‘Xpress is penned by Abhishek Banerjee. The production of the film has been taken care of by Karnesh Ssharma, Clean Sate Filmz. The film will be released on the OTT platform on December 16.