A 90-second-long video of the street fight has gone viral that shows fans from both sides exchanging blows at Sakthiulanhgara. 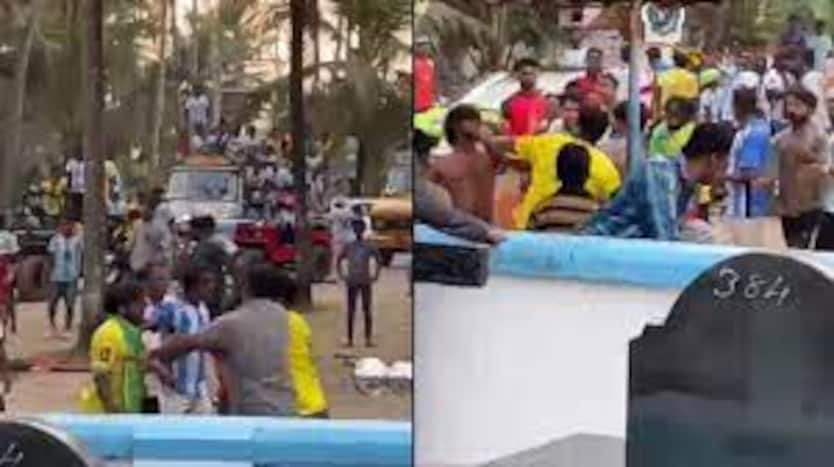 Trending News: The FIFA World Cup 2022 is a massive global event that is being watched every day by millions of fans across the world. While Indians love cricket, there is no shortage of football fans in the country. With the mega even underway in Qatar, a massive brawl broke of between fans of two popular teams – Brazil and Lionel Messi-led Argentina – in Kerala’s Kollam district.

A 90-second-long video of the street fight has gone viral that shows fans from both sides exchanging blows at Sakthiulanhgara. According to reports, the fight broke out when after an argument between both the groups during a roadshow ahead of inauguration of the FIFA World Cup in Qatar on Sunday.

The clip shows men from both sides attacking each other with sticks and iron rods. Both the groups were pacified by elders from the locality. Some fans wearing Portugal jerseys could also been seen fighting in the video.

WATCH THE VIRAL VIDEO OF STREET FIGHT BETWEEN ARGENTINA AND BRAZIL FOOTBALL FANS IN KERALA HERE:

Fight between Brazil, Argentina and Portugal fans ….. Point to be noted … It is in Kerala 😂😂 #india #hungary #fifa pic.twitter.com/ClnaEqggBP

Initially, the police did not file any case as there were no complaints from either side. However, police have decided to initiate legal action after the incident’s video started being shared widely on social media.

According to ANI, Kerala police have registered a case under Section 160 IPC (punishment for committing affray) in connection with the incident.

Officials said that the incident was reported in Sakthikulangara rural area on Sunday afternoon, and a case under section 160 (punishment for committing affray) of the IPC has been registered at Sakthikulangara police station against unidentified people.

Police said that the road shows of both groups reached a cemetery in Sakthikulangara area, and fans wearing jerseys of Brazil and Argentina got into an argument.

People from both groups could be seen attacking the members of other groups with sticks of their flags. At first, it can be seen they were hitting with hands and later using sticks, the police said. The elders intervened and resolved the problem, police added.

Pankaj Tripathi Reveals Why He Rejects Offers From South Films