It is a crushing blow for Benzema, only the fifth Frenchman to win the Ballon d’Or award and the first since Zinedine Zidane, his idol, in 1998. 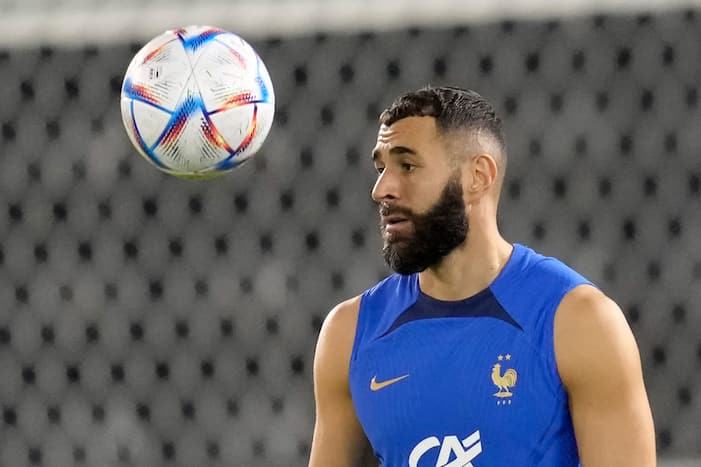 Qatar: One month after raising the Ballon d’Or in triumph to crown his remarkable rise, Karim Benzema’s dream of winning the World Cup is over before he has even played a game in Qatar.

Defending champion France’s World Cup hopes took a huge blow with the news that its star striker Benzema is out of the tournament after tearing a muscle in his left thigh during training on Saturday.

“Karim Benzema is out of the World Cup,” the French soccer federation (FFF) said. “After hurting the quadriceps on his left thigh the Real Madrid striker is forced to give up on taking part in the World Cup.”

After the news broke out, Globe Soccer Awards wished Benzema for a speedy recovery through a tweet. Check out the tweet here:

France to start without Karim Benzema, the reigning Globe Soccer Best Men’s Player of the Year, who has been ruled out of 2022 World Cup after tearing a muscle in his left thigh.

We wish you a speedy recovery, Karim!⁣ 😔🙏

Benzema was participating in his first full training session with Les Bleus when he had to come off after feeling some pain in his left thigh, the FFF said.

“He went for an MRI scan in a hospital (clinic) in Doha, which unfortunately confirmed a tear,” the FFF said, adding that he will need three weeks to recover.

Benzema also addressed his fans after the news emerged.

“I’ve never given up in my life but tonight I have to think of the team, as I have always done,” Benzema posted on his Instagram account. “So reason tells me to give my place to someone who can help our squad have a great World Cup. Thanks for all your messages of support.”

France coach Didier Deschamps said: “I’m very sad for Karim who had made this World Cup a major objective,”

Benzema had hardly played at all in recent weeks — since winning the Ballon d’Or, he has played fewer than 30 minutes for Madrid — and this was his first full training session with France.

It is a crushing blow for Benzema, only the fifth Frenchman to win the Ballon d’Or award and the first since Zinedine Zidane, his idol, in 1998.

The hugely talented Benzema, who is of Algerian descent, came through Lyon’s renowned youth academy and scored the first of his Champions League goals as an audaciously gifted 17-year-old. He’s now fourth all-time with 86 goals.

Benzema was France’s top scorer at the 2014 World Cup but did not play in France’s victorious 2018 World Cup campaign because he was still exiled from the team for his alleged role in a sex-tape scandal with then-France teammate Mathieu Valbuena.

The fallout from that scandal led to a dramatic fall from grace for Benzema. He faced a nationwide deluge of vitriol and scathing criticism, including on the political level. It led to a long exclusion from the national team from Oct. 2015 until his recall by Deschamps in May last year.

With his relationship with Deschamps repaired, Benzema scored freely for France with 10 goals in 16 games since coming back to reach 37 overall, and he formed a great partnership with Kylian Mbappe.

He won the hearts of French fans and cemented his place in the affections of Madrid’s equally demanding supporters. Benzema won five Champions League titles and has moved up to second place in Madrid’s all-time scoring list with 329 goals.

Earlier this week Benzema gave reassuring news in an extract of an interview with L’Equipe’s television channel, which was set to air on Sunday.

“I’m fine. I had a bit of pain but no tear and no serious injury. I could have played (for Madrid) but I wasn’t at 100%,” he told L’Equipe’s TV channel this week.

Deschamps has seen his squad riddled with injuries.

Nkunku was injured just minutes before the end of the team’s training session on Tuesday evening and replaced in the squad by Randal Kolo Muani on Wednesday.

Deschamps has an anxious wait to see if his best central defender, Raphael Varane, is fit to face Australia — exactly a month since he limped off for Manchester United with a hamstring injury.

Even without Benzema, France still has a strong attack to face Australia. France is likely to start with Olivier Giroud as the central striker, flanked by 2018 World Cup star Mbappe and either Barcelona’s Ousmane Dembele or veteran Antoine Griezmann.

Giroud has scored 49 goals for France, Griezmann has 42 and the 23-year-old Mbappe already has 28. Dembele has been in fine form for Spanish league leader Barcelona this season.

Deschamps has until Monday — the eve of the Australia game — to call up a replacement for Benzema to his 26-player squad. Monaco striker Wissam Ben Yedder, who has three international goals, could be an option.

Benzema would have turned 35 the day after the World Cup final. If France reaches it, he won’t be there to play in Qatar, just like four years ago in Russia.