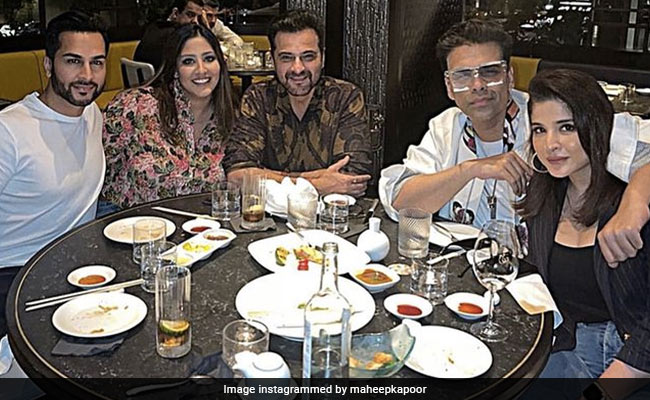 please pay attention. Maheep Kapoor is here with her “perfect night out” post. She shared two pictures on Instagram and it screams friendship goals from miles away. It includes Maheep, her husband, actor Sanjay Kapoor, filmmaker Karan Johar and a few friends. For the caption box, Maheep Kapoor wrote, “Food, wine and friends = my perfect night out.” The hashtag read, “TB [Throwback], Fans have filled the comments section with fire and red hearts. One user wrote, “OMG…you are so stylish and beautiful.” Another called the frame “beautiful”.

Maheep Kapoor always keeps her fans updated by sharing snippets from her family diaries on Instagram. On Sanjay Kapoor’s 60th birthday, Maheep Kapoor dropped a series of pictures from the birthday party and wrote, “Happy birthday to our rock my partner. Always grateful for you, everyday #60NeverLookedSoGood love you and many, many, many more celebrations together. The Kapoor family celebrated the special day in Dubai.

On her daughter Shanaya Kapoor’s birthday, Maheep Kapoor created a montage of throwback pics and videos on Instagram. Her note read, “Best 23 years of my life.”

In another post, Maheep Kapoor dropped a behind-the-scenes video featuring the birthday girl and said, “Happy birthday my love.”

According to Maheep Kapoor, ‘With family everything is extra special’.

Shanaya Kapoor will soon make her acting debut with Dharma production Bedhadak. It also stars Lakshya and Gurfateh Peerzada in pivotal roles. The film is directed by Shashank Khaitan.

How Deepika Padukone and Kartik Aaryan died at an event