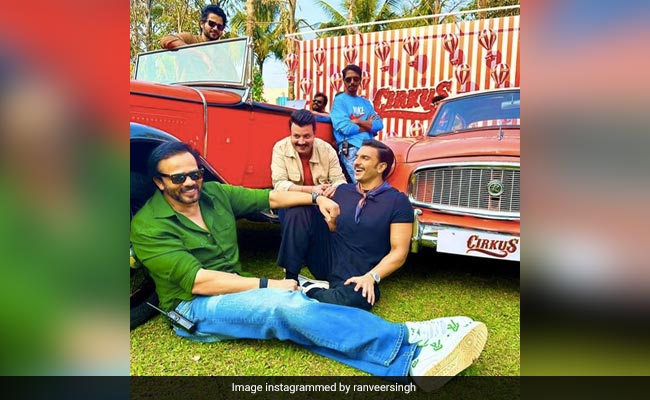 Ranveer Singh, who is busy shooting for Rohit Shetty’s Circus, has wrapped up the shooting of the film. The actor took to his Instagram handle on Wednesday and shared a post announcing the wrap along with a happy picture from the sets. In the image, we can see Ranveer, Rohit and Varun Sharma laughing, while in the background, we can see cars and a board with “Circus” written on it. In the caption, he wrote, “Shooting over, promotion planning begins! Maas-ter filmmaker’s maas-ter plans!!! Boohahaha! #CirkusThisChristmas.”

Directed and produced by Rohit Shetty, the period-comedy drama also stars Pooja Hegde and Jacqueline Fernandez in pivotal roles. Deepika Padukone and Ajay Devgan have cameo appearances in the film. The film is based on the iconic 1982 film Angoor starring Sanjeev Kumar and Deven Verma. Cirkus will hit the theaters on December 23, 2022, on Christmas Eve.

Meanwhile, Ranveer Singh has another film in his kitty which will release next year. It is Karan Johar’s love story of Rocky and Rani, starring Alia Bhatt in the lead and Jaya Bachchan, Shabana Azmi and Dharmendra in key roles. A few days ago, the makers announced the new release date of the film. Re-sharing Karan’s post, Ranveer captioned it, “My heart is filled with excitement and gratitude… #RockyAurRaniKiPremKahani releasing on April 28, 2023 in cinemas near you!”

Anushka Sharma and Virat Kohli, twinning and winning at the airport

Anupam Kher Bumps into Virat Kohli, Anushka Sharma at Airport Lounge, Here's How They Bowled Him Over