Pop star Rihanna has compared motherhood to taking acid. In her recent interview, the singer and actress compared taking care of her newborn son, whom she shares with her boyfriend, A$AP Rocky, to an out-of-body experience. As per a report in New York Post, the Lift Me Up singer shared her thoughts on motherhood wth Access Hollywood at the premiere of her ‘Savage x Fenty Show Vol. 4’ lingerie show.

“The beginning is like you’re tripping acid every day. It’s wild, trippy as hell,” said Rihanna.

“You look at him and he’s yours, but he’s a stranger and you’re learning him as he’s learning you and learning the world. When he looks at me in my eyes, my whole soul … I can’t tell if it’s cold or hot,” she described the feeling.

For the uninitiated, Rihanna and A$AP announced they were expecting their first child in January in an epic Harlem photoshoot. Their son was born in May, but the artists have been hush-hush on his name.

In February, when Rihanna stepped out and flaunted her baby bump, she set the internet off into a frenzy. The Grammy-winning singer-songwriter who expected her first child with boyfriend ASAP Rocky at the time dished out some of the chicest and most stylish maternity looks that flaunt her baby bump.

The duo stepped out to make their red carpet debut as parents-to-be together, at the 34-year-old’s Fenty Beauty and Fenty Skin photocall in Los Angeles. For the event, RiRi glammed things up in a head-to-toe shredded look from The Attico. Her look involved a halter-neck shredded glittery green top that hugged and showed off her bump. She styled this with a similarly shredded set of pants in an ombre pink hue and purple stilettos to complete her look. 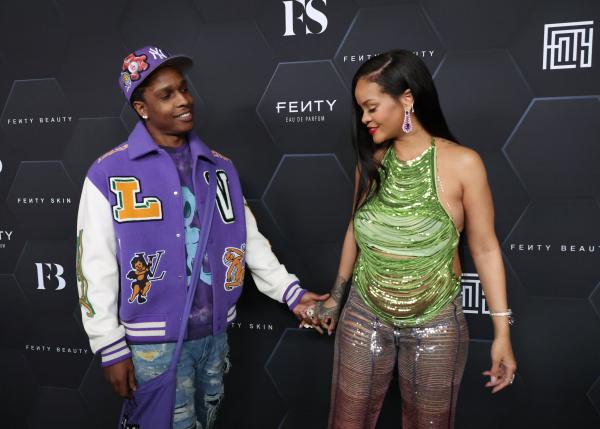 Now, while Rihanna may be in baby bliss, she’s not delivering a new album as many fans suspected she would when she announced she will headline the Super Bowl halftime show in February. Rihanna laughed while speaking with the Associated Press, “Super Bowl is one thing. New music is another thing. Do you hear that, fans? The second that I announced this, I said, ‘Oh, my God, they’re going to think my album is coming.’ I need to get to work.”